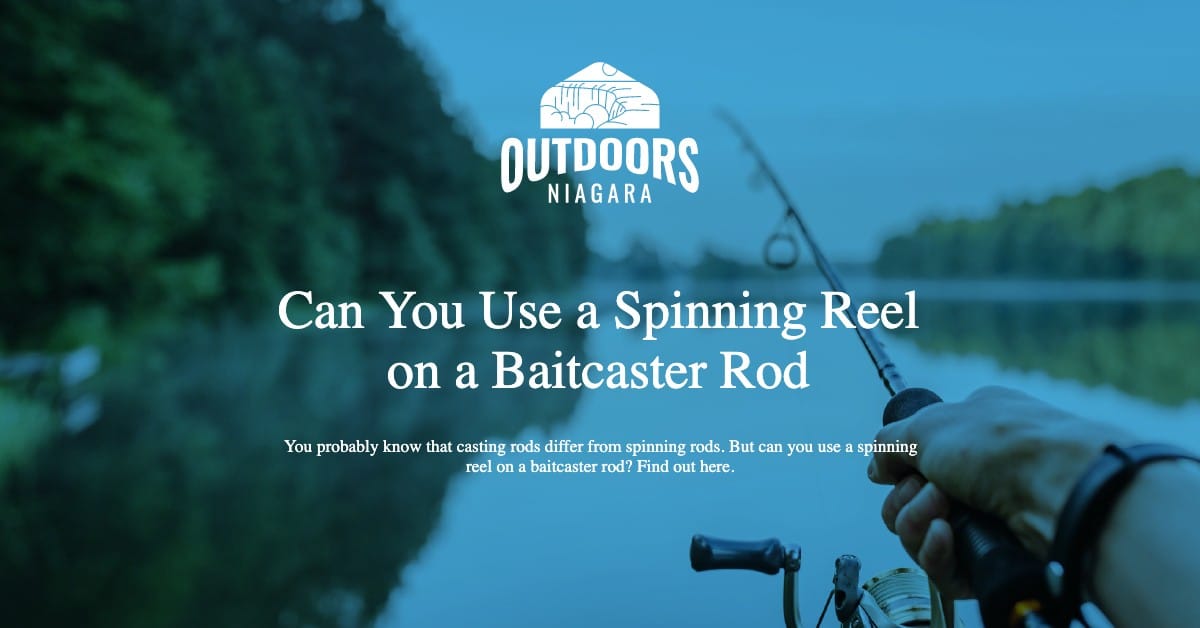 Whether you are just starting or are already an experienced fisherman, you probably know that casting rods differ from spinning rods.

With that in mind, the obvious answer would be that you shouldn’t mix the two setups.

But what if you’ve forgotten your casting reel and don’t have any spinning rods on you, but the day is just perfect for a fishing trip?

Well, it is this scenario that we will try to help you with.

In this article, we will discuss whether you can use spin-cast reels on a baitcasting rod and the main differences between fishing reel types. Let’s get started!

Differences Between a Spinning and Baitcasting Rod

There are two methods for distinguishing between these rods.

First, test to see if is it simpler to bend the rod with the guides pointing up or down.

It’s most likely a spinning reel if it’s simpler to bend down.

It’s a casting rod if it’s simpler to bend with the initial guide pointing up.

The fingertip is another method to identify the difference.

A tiny fingertip is positioned right before the reel seat on baitcasting rods.

When casting, it’s much easier to keep your grip on the rod.

This function is not present on spinning rods since it is not required because your hand remains attached to the rod during the cast.

The Operating Mechanics of a Spinning Reel and a Casting Rod

It’s also vital to know how to use a high-quality ultralight spinning reel with a casting rod.

The benefits of spinning reels are that they are simple to use and are excellent for novices.

Among the spin caster reel pros are that these are ideal for throwing longer distances with lightweight fishing bait.

Operators may twist the bail and toss it into the water while keeping the lead finger on the fishing line.

Then simply turn the handle and reel the line back in to seal the bail.

On the other hand, the spin caster reel cons are that these aren’t suitable for heavy-weight fishing.

Casting rods are better for heavier fishing bait and may be more difficult to use than spinning reels.

When compared to spinning reels, they appear to take a lot more expertise and practice to use.

As the line falls off, anglers may need to apply additional pressure to the spool.

In comparison to spinning reels, rods produce a lot more drag and backlash.

As for the bait caster reel pros, apart from heavy-weight fishing, we would name more leverage.

Discussing the bait caster reel cons, the main one is the high price.

Anglers may need to modify their distance and casting accuracy frequently to achieve the best catch possible.

The Main Difference Between a Baitcasting Rod and Spinning Reel

The spinning reel is mounted on the casting rod’s top.

When the line comes off the reel, and they don’t match, it might cause a lot of loops.

By making the line considerably straighter, the casting rod would also generate some friction.

It may limit the casting distance by restricting the line’s ease of flow.

In addition, the casting rod is closer to the pole and at a lower angle.

The spinning reel, on the other hand, is often considerably bigger, allowing for fewer line loops.

When hauling in a catch, it may also cause the casting trigger to grind on the hand.

The oversized guides on a spinning reel are usually much different from the guides on a casting rod.

Highlighting Features of a Spinning Reel

The spinning reel is shaped like a cylinder and connects the fishing reel to the rod.

The spincast reel is suspended below the rod, with coiling lines by the spool.

It then moves on to the reel guides after passing past the roller.

The reel allows casting a rod with low tension.

Attaching a Spinning Reel on a Baitcaster Rod

While mounting a spinning reel to a baitcasting reel is theoretically doable, it is not recommended.

This technique will not only get a lot of strange stares, but it will also have a significant impact on the rod/performance reels.

The main two reasons? The structure as well as the guides of a spinning reel.

A spinning reel is designed for use with a spinning rod, which has larger guides than casting rod guides.

These larger guides will allow your fishing line to come off the reel with the least amount of friction, allowing you to make longer and more precise throws.

If you use a spinning reel with smaller guides on your casting rod, it will impair the cast and accuracy.

As you make your cast, the finest crankbait rod provides exceptional distance and accuracy.

Spinning rods can be cast in straight lines but only for a short distance.

If you attach a spinning reel to a baitcaster rod, your fishing line will be released in a coil, which is why you need a broad and wide guide, which casting rods lack!

The line will be released from its spool into a coil, but the thin and tiny guides on the casting rod will slow it down, limiting the possible cast and distance.

With the guides pointing down, spinning rods are intended to flex.

The portion of the fishing rod where the guides are placed is meant to be constructed of a soft and flexible material.

The backbone of your rod is the strong, non-flexible section behind the guide.

This is what gives your rod the strength it needs to haul in big fish.

It’s as if you’re reeling in fish with a large noodle if your rod has no backbone and its sides are constructed of the same soft and flexible material, making it tough to catch game fish.

That is why your rods must have both a flexible and a rigid side.

Also, a rod holder is a great investment when fishing with a spinning rod.

Are Baitcasters and Casting Rods Better Than Spinning Rods and Reels?

It all depends on the fishing technique you are using and whether you want to catch large fish or enjoy lightweight fishing.

In the latter case, you are better off with spinning rods/reels.

Can You Use a Baitcasting Reel on a Spinning Rod?

It all depends on whether we are talking about a basic spin caster reel or an expensive reel intended for baitcasting rods.

Similar to attaching a popular spin cast reel on a baitcasting rod, it is theoretically doable.

Still, casting reels on a spinning rod will mess with your casting accuracy, distance, and most importantly, may not be suitable for your skill level.

Why Not Use a Baitcaster on a Spinning Rod?

While the size of the spinning rod guides wouldn’t mess up the bait cast reel, the backbone differs, and thus it isn’t an ideal choice if you want to have success on the water.

Are All Reels Compatible with All Rods?

You should always try to choose a reel type by the fishing rod type.

In most cases, you will be able to attach a bait caster to a spinning rod and a spinning reel to a casting rod.

Still, you will be making a sort of a Frankenstein out of your fishing equipment and may lose the grip on your casting distance and accuracy.

Attaching a spin caster reel to a spinning rod depends on the specific rod model and can work as an additional reel.

While you can use a spinning reel on a bait caster rod, we wouldn’t recommend it.

If you do attach the wrong reel, there’s a strong possibility your fishing rod may break because it bends in the wrong direction, and there’s an even better chance you won’t be able to use it to its maximum capacity.

It’d be like attempting to hammer a nail with a cork.

With that in mind, you should choose the type of reel based on the rod you are using to fish.