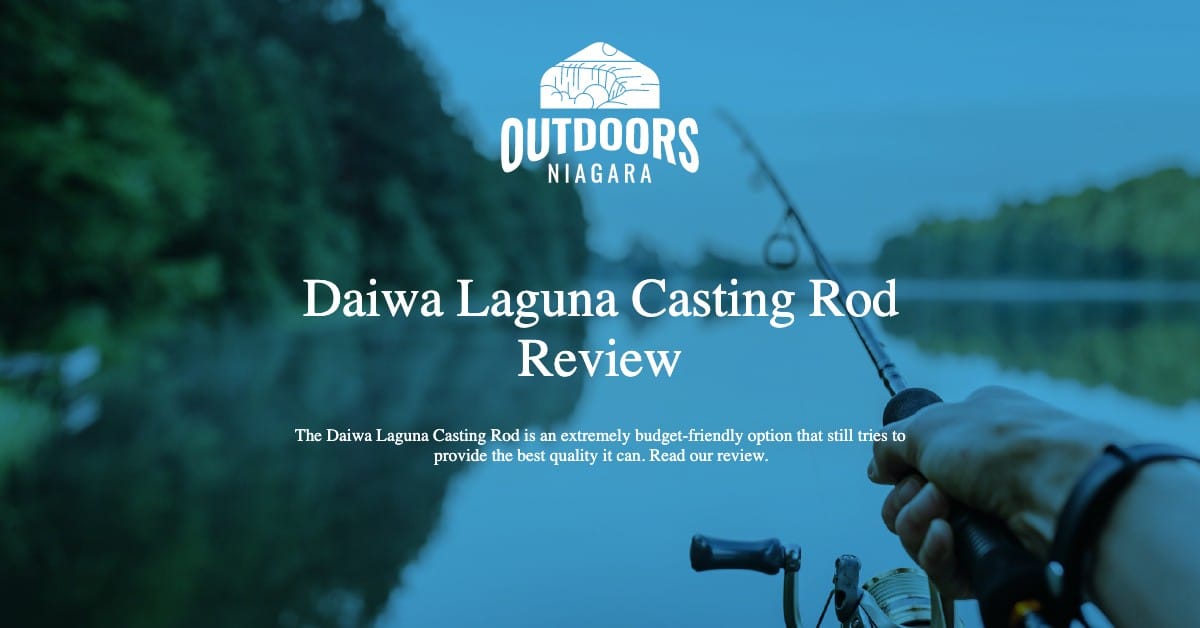 Casting rods come in all sizes, powers, and actions, but the most important quality about any baitcasting rod is its overall value.

There are a couple of different ways a company can go about achieving value, and the Daiwa Laguna casting fishing rod gives a solid college-try at hitting all of them.

Daiwa is actually a brand owned by a larger company, Globeride, though both of them are Tokyo-based.

That said, Daiwa may not be the only company under the Globeride corporate umbrella, it is still easily the most successful brand both in terms of popularity as well as product development.

However, this means that Daiwa doesn’t necessarily focus on any particular type of fishing product or niche which can lead to unfocused products.

With the Daiwa Laguna Casting Rod, this shows its head on occasion for an extremely budget-friendly option that still tries to provide the best quality it can.

Before considering the overall construction of the Daiwa Laguna casting pole, it’s important to reiterate that this product is designed to be as budget-friendly as possible.

In order to accomplish this goal, you inevitably have to sacrifice something, and more often than not, overall construction quality suffers.

This seems to be the case with the Daiwa Laguna fishing rod as it’s been known to fail well within the advertised specs– which themselves are nothing particularly special.

As such, you should get this rod when you know for a fact that you will not be using it for more than a single season– regardless of what type of fishing you do.

As an extremely cheap, budget-friendly baitcasting pole, the Daiwa Laguna provides a decent range of lengths with 6’, 6’6”, and 7’.

This means that you should be able to find a rod that works for whatever waters you want to fish on.

The largest waters when casting from the shore or smaller rivers may still present issues.

This is arguably one of the areas where the Daiwa Laguna makes its money on more than just the low price.

Specifically, the Daiwa Laguna casting rod uses a combination of graphite and carbon fiber for its blank which significantly increases its sensitivity compared to other materials.

Unfortunately, this also means that the blank isn’t as strong as other materials and will fare even worse in colder temperatures.

Though it’s rated IM-6, it’s worth considering whether the graphite undergoes all of the hardening processes.

The reel seat uses stainless steel which will at least help prevent corrosion.

Finally, the EVA foam handle isn’t the best material, but it is one of the lightest.

The Daiwa Laguna only comes in a fast action, though this helps provide more accuracy and sensitivity, so it’s worth the tradeoff.

The increase in sensitivity is further enhanced by the materials which make this a fairly sensitive rod.

The Daiwa Laguna baitcasting rod’s power is definitely one of the more deceptive qualities that can leave you dissatisfied if you don’t know what to expect.

This is because this fishing pole comes in medium and medium-heavy power ratings which positions it for an average setting, but that’s not how it plays out.

Because the rod’s overall durability is not the strongest and the maximum line test is low.

As such, the power needs to be understood within its targeted range, unlike other rods that have more margin for error.

The Daiwa Laguna doesn’t provide its weight, though it advertises a lightweight build, and all of the other information seems to suggest that’s true.

For instance, the use of graphite and carbon fiber not only increases the action and sensitivity but significantly reduces the weight compared to other materials.

On top of that, the handle’s foam material as well as the reduced amount further reduce the expected weight.

By and large, the Daiwa Laguna casting rod’s sensitivity is good– though that’s not to suggest you can’t quibble about it.

The use of graphite and carbon fiber for the blank significantly increases the sensitivity compared to other products comparably priced.

This is a bit of a head-scratcher as the materials used and the action suggest that the Daiwa Laguna should taper at around the middle point with a slightly deeper bend.

However, it’s been reported with more regularity than is preferred that the taper feels stiff and doesn’t bend the same way as other rods.

As is pretty standard for a budget-friendly baitcasting fishing rod, the Daiwa Laguna doesn’t actually print the rod’s line and lure specs on the blank.

Instead, this casting rod brands the blank with the make and model.

On the positive side, it does come in a striking color scheme with stylized text.

The Daiwa Laguna’s rod guides are made of aluminum oxide, as mentioned earlier, which is great at helping prevent the line from tangling– perfect for beginners who may not know how to cast.

On the other hand, braided lines will inevitably cut through these guides, though you likely wouldn’t need it with the weight limit anyway.

The Daiwa Laguna baitcasting pole makes up some of its money with an EVA foam handle that is also split.

This can be a bit challenging in less than ideal conditions, but the trigger grip at least allows you to maintain a solid grip in good conditions with the option to add third-party components for better grip.

The Daiwa Laguna is a baitcasting rod which means that the reel is seated on top of the rod and the guides run along the top of the rod, as opposed to both being positioned underneath.

This arrangement makes the casting pole designed more for beginners and experts than the overwhelming majority in between.

That said, because the Daiwa Laguna’s overall construction is not the sturdiest, experts will likely prefer paying more for a better-performing rod.

On the other hand, children are far less likely to be able to push the pole beyond its limits whether they want to or not, so the value tends to stick.

As mentioned prior, the baitcasting arrangement of the Daiwa Laguna fishing pole situates the reel on top of the rod which allows spincasting and baitcasting reels.

It’s worth noting that this arrangement plays against the rod’s weakness by placing all of the pressure on the rod instead of the guides.

The Daiwa Laguna baitcasting fishing pole comes with Daiwa’s standard 2-year warranty for all of their rods, but that is a bit more dubious than you might believe.

This is because a warranty is only as good as your ability to cash it in, and as you will see in the next section, that can be easier said than done.

This is arguably the point where the whole deal may come crashing down and ultimately reduce the Daiwa Laguna’s value to the point that it’s still not worth it.

As has been already covered, you either really need to know what you’re doing with this rod or not care about it at all.

Part of the reason for this is because if the rod breaks, it can be maddeningly difficult to get Daiwa to completely honor the warranty.

It also doesn’t help that the technicians will do everything in their power to deny the claim, and it’s almost unheard of for them to replace two defective rods– though that’s not necessarily out of the realm of possibility to receive.

Uses (Who is this good for)

When you break everything down, it can be a bit difficult to identify the Daiwa Laguna’s best use, though a couple immediately come to mind.

For anyone who is an at all proficient fisherman, there is a good chance that this casting fishing pole doesn’t offer enough performance to satisfy your fishing needs.

On the other hand, if you’re a complete beginner or a child, then the Daiwa Laguna is an excellent option that provides a cheap tool to learn (and fail) with.

Of the two, this casting pole is probably better suited for children due to its reduced overall durability, since they’ll be less tempted to use it improperly.

In the end, the Daiwa Laguna casting rod comes with some serious warnings and severe limitations compared to high-end poles.

However, for a single-season fishing pole, you can abuse to your heart’s content and not feel a thing when you throw it away at the end, there are few better.

Granted, you will need to be extremely selective about where you fish and what type of fish you’re trying to catch.

Fish for a species too big or in a location with too much brush and debris under the water, and you’re liable to find a casting fishing rod that won’t even make it through a single season.

However, if you’re careful with when and where you use the rod, it’s difficult to find another rod as cheap that provides many good things too.

For teaching a child, this casting fishing pole is a great chance to save a bit of money while still teaching them what they should be looking for when the time comes to upgrade.