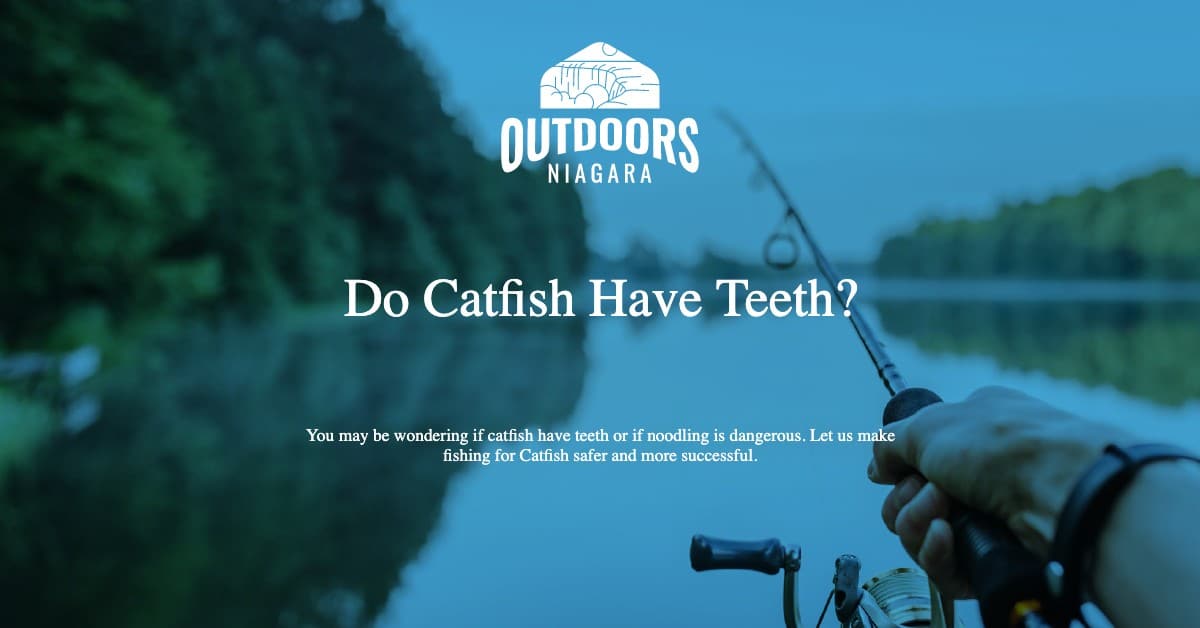 Catfish fishing is an all-American pastime and one that is growing quickly.

But, if you are new to catfish fishing, you may be wondering:

Inside this blog, we cover those questions and many others.

Along the way, we give you some inside information that makes fishing for Catfish safer and more successful.

Do catfish have teeth?

Catfish do have teeth. They are tiny and not designed for chewing.

Instead, they have teeth that help them grip food.

Inside their mouths are a top and bottom row of teeth that look like coarse sandpaper.

Thanks to their wide mouths and powerful jaws, Catfish do not need sharp teeth as you would find on most predatory fish.

These fish suck live fish and other creatures into their mouths and then crush them.

How many teeth does a catfish have?

Catfish have thousands of tiny teeth that are not likely to cause you any damage.

Instead, they use their teeth to hold prey.

The adaptation is perfect because fish are slippery.

Because catfish do not have incisor teeth that would usually penetrate the flesh and allow the jaws to rip it apart, they use their thousands of tiny teeth to hold the fish still while they gulp it down alive.

Does a catfish bite hurt?

On bare skin, you would likely not have very much damage.

The tiny teeth grip your finger and can cause a braiding wound, but that is not very likely.

This is because they do not chew their food; instead, they gulp it down whole.

Do catfish have jaws?

Catfish do have jaws. They have an upper jaw and a lower jaw.

Both jaws have places inside the mouth for pads that hold their tiny teeth.

The bite of a catfish is not dangerous.

There are quite a few myths that surround catfish bites.

One of those myths is that Catfish can sting you.

They cannot sting, and another myth is that their barbels or whiskers can sting you.

They cannot sting you.

Many people liken Catfish to saltwater lionfish, but they are nothing alike.

The most dangerous aspect of Catfish is the bony spines in their dorsal fins.

Some may contain a toxin; so long as you are careful not to touch the dorsal fins, you are safe.

However, if you touch the dorsal fins, the tips of the Dorsal spins can break off if they jab into your skin.

That is also true of most fish.

Can you grab a catfish by the mouth?

You can grab a catfish by the mouth.

There are also tools called lip grips that will hold a catfish by the mouth.

It is not wise to stick your finger in the mouth of a catfish.

While they do not have large teeth, their thousands of tiny teeth can scrape your skin enough to make you bleed.

It is much easier to use a dip net or landing net and then the lip grips.

Be sure to support the fish under the belly and hold it horizontal.

Be careful of the dorsal and pectoral fins, as those are where the spines are that can jab you.

How dangerous is Catfish noodling?

When safety precautions are taken, noodling for Catfish is relatively safe.

However, other things in the water can hurt you.

It is advisable to always noodle in pairs. Use the buddy system to keep you safe. Giant catfish are strong, and they can keep you underwater longer than is safe.

Has anyone died noodling?

People die while noodling all the time.

Most of those deaths are due to drawing, though some may die from the infection.

Catfish holes are deep, and many other creatures will live in them.

A giant snapping turtle will latch onto your hand, and you will not be able to get it out of the hole.

Without help, you could drown.

Other dangers include getting clothing stuck on roots or underwater obstacles and not being able to get free.

Can a catfish eat a human?

There are cases where Catfish have eaten humans.

Though mostly that is in India, the Catfish fed on the corpses of people who have died naturally.

Some species of catfish can grow as tall as an adult. Catfish will eat whatever they can fit in their mouths.

So if you were to encounter a catfish large enough to hold you down, it is possible they could consume you.

Do large catfish have teeth?

All Catfish have teeth, and regardless of the age of the Catfish, the teeth remain like sandpaper.

Even large catfish have thousands of tiny teeth that remain tiny and never grow larger than a grain of sand.

What happens if a catfish bites you?

If a catfish bites you, it may break the skin and can cause your hand to bleed.

Other than that, not much happens.

The bite can hurt, but the wound, if any, is not deep.

It would help if you took care to avoid secondary infections.

Wearing a glove while noodling is the best way to avoid damage to your skin from the tiny teeth that catfish have.

Can Catfish bite your finger off?

Catfish cannot bite off your finger.

Their teeth are so small that the most damage they can do is cause an abrasion.

Their jaws are strong, but they are not powerful enough to break the bones in your hands.

No. Catfish cannot sting you as they have no stingers.

Wasps, bees, ants, and scorpions can sting you. Catfish, despite many myths, cannot sting.

However, people can get jabbed by the rays in their dorsal or pectoral fins, which can feel and look like a sting, especially since the tips of the spines will break off and embed themselves in the skin.

Do catfish have venom? Are they poisonous? Are the fins?

Some catfish have venom in the spine rays of their dorsal and pectoral fins.

Some species of catfish have no venom at all.

The catfish venom is on par with the venom of a bee sting.

It can present danger from an allergic reaction, secondary infection, and in some cases, it may result in necrotic injury.

The venom is found in the sharp dorsal and pectoral rays, not in the barbels or teeth. Catfish do not have fangs.

Safety Tips When Noodling for Catfish

The best safety tip is to always noodle with a partner.

Drowning is the most likely cause of death while noodling.

If you want to avoid the abrasive bite of Catfish, use a noodling glove or sleeve.

Another handy tool that works to help avoid the mild catfish bite is a product called lip grips.

Avoid noodling in deep water and in water where alligators may be present.

Avoid placing your hands over the dorsal or pectoral fins where a jab from a toxic ray may occur.

Noodling for Catfish is a growing sport; however, it is not legal in all states in the US.

Catch and release is a good policy for noodles to follow as it helps preserve catfish populations.

If you do catch fish and want to clean it, we have a way to do it in under 10 seconds.

Large catfish can be pretty old, so be respectful.