The Upper Niagara River where it empties from Lake Erie is another story in itself. It’s history is as rich as the Lower Niagara and some of the most recent stories of it's history just goes back to the 1920’s when prohibition took over in this country. History shows the river being a source for illegal booze filtering into this country from Canada. Canada at the time had no prohibition. This was the legendary Al Capone’s heyday! Even today recreational divers and collectors gather  whisky bottles that were dumped overboard because of fear of apprehension by authorities. Some of those bottles found even still contain some of that illegal booze!

Sturgeon: The Sturgeon is another part of the Upper Niagara History. Some years back in the 30’s, 40’s and as late as the 50’s, sturgeon were abundant and to locals it was a means of many peoples livelihood. Trapping and catching sturgeon was as common in those days as going out and catching a muskellunge today. Possession of sturgeon today, is strictly illegal in New York State waters.

Muskellunge brings another story in here. "Muskies" are abundant in the Upper Niagara, abundant meaning your chance of latching into a 40 inch plus muskie is as good as anywhere  in the United States, and in most instances better than most places. "Muskie" is the unchallenged abbreviated name the locals call the muskellunge. Muskie are a highly prized fish anywhere, and catch and release is more popular than keeping one.
[TOP]

Bass. [Smallmouth] Opening day, bass fishermen have a heyday where everyone can come home with a limit of bass all way above the legal size. This continues all around the Upper River all summer. In 1995, the New York State record smallmouth bass was caught in Lake Erie near where it empties into the Upper Niagara. That bass tipped the scales at 8# 4oz. and that record will be broken in the Upper Niagara some day. It's been close, but close don't count only in horseshoes.

Walleye. Trophy walleye have been caught through the years and the Ontario record walleye was pulled out of the Upper Niagara near Fort Erie Ontario. It tipped the scales at 22.2# and measured 36.5" long!

The Upper Niagara River page will be updated in the near future to include more of the exciting Upper River fishing and the stories of the Islands.
[TOP] 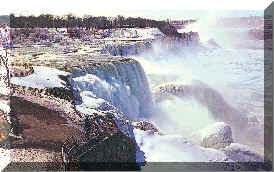 This is what Niagara Falls, the "Thundering Waters" looks like in the dead of winter. Notice the observation area with the railing around it in the forefront. This could quite possibly be the area Father Louis Hennepen first observed and wrote about in his early writings in 1683. The ice build-up is from the mist that rises and freezes. Looking to the right you can see some of the mist rising from the Canadian Horseshoe Falls and on the far right is the mighty Niagara River in all its winter beauty. The ice cover you see goes from shore to shore and is actually jammed there until the spring thaws. About 10 miles down river at this time of year is when the greatest steelhead fishing on earth is taking place. For the most part this stretch is reasonably clear of solid ice. No, Niagara Falls doesn't stop flowing at any time. [TOP]

The 5 Great Lakes are Shown here. The red dot is where the Niagara River is. The Niagara River connects the two Great Lakes of Erie and Ontario. The river flows northward, empties into Lake Ontario and to the St. Lawrence River where it empties into the Atlantic Ocean. Niagara Falls forms a natural fish barrier for fish traveling upriver but many fish survive the drop over the Mighty Cataracts creating multiple species of freshwater fish available in the Lower Niagara..