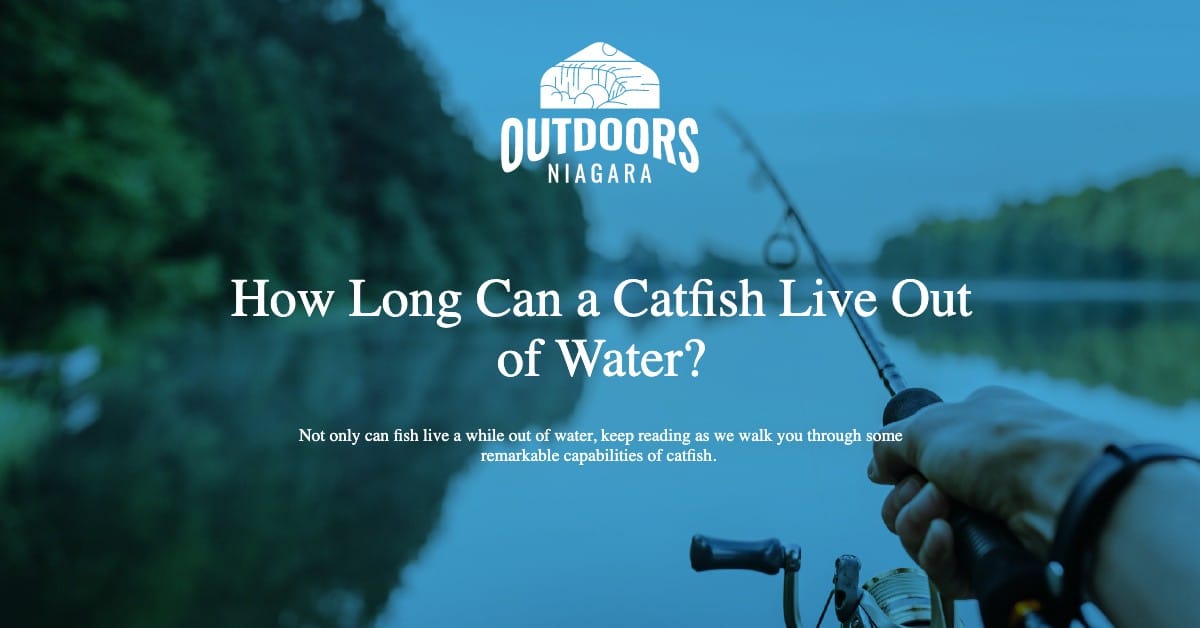 They are a thrill for anglers, but they also survive in some of the oddest places for fish.

Rice paddies, which flood with water, often have catfish in them.

So, what happens when the water in those places dries up? Amazingly, catfish can breathe atmospheric air, and many people ask how long a catfish can live out of water.

Keep reading as we walk you through some remarkable capabilities of catfish.

How long can a catfish live out of water?

There is not a specific timeframe in which a catfish can live out of water.

The walking catfish aptly gets its name because it can walk on land to find a new pond if its water source dries up.

These amazing catfish can travel over a kilometer and have served outside of water for 18 hours.

Most catfish can last a few hours out of the water, and some may die almost immediately.

One key point is that if their skin remains wet many will survive out of water for several hours.

The Walking Catfish is an extremist.

Can catfish breathe out of water?

Most, if not all, catfish can breathe out of water.

Catfish have a special chamber in their head that allows them to breathe atmospheric oxygen.

While they may look like they are gasping for air, they are activating a mechanism that closes off their gills and opens their air-breathing chamber.

They are essentially equipped with two sets of breathing organs.

The two organs cannot work at the same time.

So when one is active, the other organ is shut away.

Also, to note. While they can breathe air, it is not the best situation for them.

Environmentally, it is very taxing on their system, and they will only last so long on land before they perish.

Without oxygen, catfish would die.

Because of the conditions in which they live, catfish have evolved to have two breathing organs.

How long can a catfish live?

In terms of age, Wels catfish live for about 60 years.

They can also be longer than a grown human and have been reported to eat humans.

The reports did not indicate if the catfish killed the humans and then ate them or if they ate humans who were already dead.

There have been records of Wels catfish who attack people and then drown them.

The oldest channel catfish is 24 years old, but many feel that channel cats can live much longer.

The reason why people think both can live longer is that both species of catfish can grow large.

How about on ice? If you put a live catfish on ice, it would probably die in just a few minutes.

The sudden shock of going from a pond or lake onto ice would kill it.

If you have a catfish in a five-gallon bucket half full of water, and you felt the water was getting too warm, you could add about a cup of ice in the water.

You would let the ice sit for a few minutes, and you could add another cup of ice until the water temperature cooled to an acceptable degree.

Changing the temperature of the water too quickly would kill the fish.

That would be the same advice if you wanted to put the catfish in a pond.

You would soak the bucket in the pond until the water in the bucket matched the pond.

For example, some live in rice paddies which can be muddy for part of the day and then wet the other half.

In general, a catfish can live for about ten days to two weeks without food.

How do catfish survive in the mud?

Because mud is wet, catfish can survive in it.

Most catfish have two breathing organs.

One will take oxygen from water and the other from the atmosphere.

When they breathe atmospheric air, they seal off their gills.

Only one organ will work at a time.

So long as the mud remains wet, they will be okay. If the mud dries out, they have only a few hours to find more water.

Do catfish survive catch and release?

Whether a catfish survives a catch-and-release situation depends on whether the fish has any damage to its mouth, how long it is out of the water, and whether or not it has been able to switch to its atmospheric breathing organ.

Always support catfish horizontally so that their weight is not damaging their mouth.

If you are taking a trophy picture, make sure you do it quickly.

Leave the fish in the water until you are ready to snap the phone and then quickly release the fish.

How to keep your catfish alive

You can keep small catfish alive in a bucket of water with a bubbler in it.

Add a few cups of water to the bucked every 1/2 hour.

Then, take out a cup and add a fresh cup to keep the level the same.

Catfish are remarkable in that most can breathe out of water.

While they have an internal organ that allows them to breathe atmospheric air, being out of water is dangerous.

It can be a dire situation depending on the type of catfish, the environmental conditions, and how fast they can get back into the water.

The catfish should remain in the water rather than on land.

Catfish can live for decades and should be honored as a fishing target.