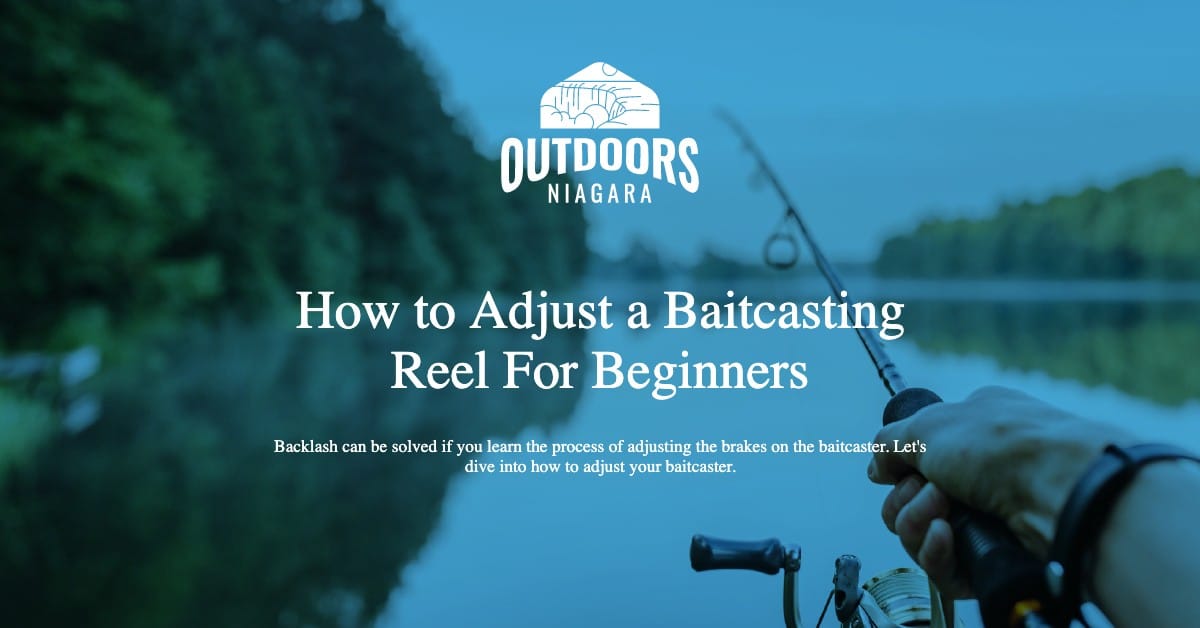 In using a baitcaster fishing reel, the main issue beginners face is backlash.

However, this issue can be solved if you master the process of adjusting the types of brake on the baitcaster.

There are three brake types on a baitcasting reel and we’ll show you how to adjust each:

Spool tension knobs apply pressure to slow the spool down during casting so that you don’t get backlash.

They vary in appearance depending on the type of reel you’re using.

Tie a bait whose weight is within the suggested lure size specified to the rod to begin adjusting the tension knob.

Set the magnetic brake to the maximum position. Click or spin the spool’s handle release while holding the rod at shoulder height.

Examine the lure’s speed as it descends onto the ground.

You should tighten the spool tension knob so that the bait moves quickly and causes a backlash whenever it touches the floor.

Continue to make modest changes to the spool tension knob, then repeat the process until you have a nice, smooth, progressive fall with minimal backlash when it reaches the ground.

A tiny “overrun” of the line at the time the lure touches the ground is acceptable; it ought to be minimal, though.

After that, you’re almost ready to cast the lure with minimal backlash; all you have to do now is fine-tune the other brake.

A magnetic braking system is used on almost all new low-profile baitcasting reels.

If you don’t notice this break, there is a rotational braking system, which you will learn more about as you read on.

Magnetic brakes utilize magnets to reduce the speed of your reel in a smaller measure compared to the spool tension knob.

Make a couple of easy casts without attempting to cast to the farthest distance once the tension knob is set.

As you become used to the setting, gradually increase the distance between each throw without backlashing.

It can be difficult to cast your baitcasting reel to the wind, which is why you should use magnetic brakes.

Again, simple tweaks and some casts will suffice until you are able to cast it to the wind.

The magnetic brake will require adjustment as conditions change.

Hopefully, you’re getting the notion that you’ll have to fiddle with the magnetic braking system quite a bit to reduce backlashes.

A centrifugal brake would be the last possible break to tweak on your baitcasting reel.

Centrifugal brakes are more frequent on older types of reels, and they are still seen on the most expensive reels today.

Consider an ice skater to better understand how the centrifugal brakes function.

When an ice skater spins while pushing his arms out, they will move at a slower pace; when they spin with their tucked arms in, they travel quicker.

Centrifugal brakes work similarly to the way it works in ice skating.

How Does A Baitcasting Reel Work?

An open face is prominently present on a baitcasting reel. Parallel to the rod, the spool rotates.

The spool of a baitcasting reel rotates, unlike that of a spinning reel.

The spool of a spinning reel is wound by an oscillating bail. If it happens that a fish pulls the drag, its spool will rotate.

Baitcasters are divided into two types.

The typical round design is typified mostly by its Abu Garcia Ambassadeur style.

The low-profile design allows for smooth, longer casts by sitting lower on the rod and feeding line down the fishing rod at a flattened angle.

There is no distinction between the two in terms of functionality and operations.

Unlike the large-diameter guides on a spinning rod, the guides on a baitcasting rod are small, allowing line to flow smoothly in a regular, uniform route without the loops that can occur with a spinning reel.

To cast, use your casting hand’s thumb to grasp the spool and the lower half of your thumb to squeeze the release bar.

Backcast to load the rod, then lift your thumb off the spool at the point of release.

Apply your thumb to the spool and activate the drive mechanism by rotating the reel handle forward as soon as the lure meets water and stops moving.

The high learning curve is undoubtedly the one disadvantage of a baitcasting rig.

Beginners will encounter frustrating snarl line backlashes, but don’t give up. It can even happen to the most seasoned anglers.

Anglers who compete in bass tournaments refer to the reaction as a “bird’s nest.”

You’ll get to really like the baitcaster’s smoothness once you master the cast and thumb-braking sequence.

Baitcasters can also be used for a variety of purposes.

You may throw lures into tiny gaps under tight cover where huge bass hide by using flipping and pitching tactics, which we’ll discuss later in this series.

Due to the split-second delay between splashdown and the closing of a spinning reel’s bail, you can’t execute this reliably with spinning rigs.

A bass in close cover will often bite as soon as the bait reaches the water, and spinning reel lag will lead you to miss the fish.

When you lightly tap the handle of a baitcaster, the spool engages, allowing users to set the hook and start pulling the fish in a single swift motion just when the strike occurs.

Advantages and Disadvantages Of Baitcasting Reel

While the fishing line leaves the spool easily during a cast on spin-casting and spinning reels, a baitcaster reel has the possibility of overrun.

This is a casting difficulty in which the reel’s spool will not spin at the same pace as the fishing line leaving the reel.

Professional anglers, on the other hand, prefer baitcasting reels because they provide more command over their casts.

Because the spool of a baitcaster reel spins in tandem with the fishing line exiting the reel, a simple twitch of the thumb can halt or pause a cast while it is still in the air.

Anglers, such as bass fishermen, can now cast with greater precision.

Furthermore, the design of a baitcaster enables a fisherman to perform speedier casts, even with baits that are weightier.

There are also a few downsides to using a baitcaster reel; for instance, there is a greater risk of backlash during a cast if the wrong technique is used.

The lack of a proper technique has the tendency to cause a huge backlash that is potentially dangerous.

A baitcasting reel is also quite unsuitable for light lures.

As with anything we would like to invest in, it is important to save money.

However, a baitcasting reel happens to be significantly costlier than a spinning reel, so it is obviously not your go-to for saving costs.

There is also the small matter of it not being entirely suitable for beginners because it requires a good measure of skill and expertise.

It also requires a large knowledge base of spool tension adjustment for the different sizes of spools, whether tighter spool tension or otherwise.

Overall, a baitcasting reel is a good option for you. It may take some time to learn how to use it as a beginner, but it could be just the perfect tool for you.

A baitcasting reel is similar to a normal fishing reel in that it is a type of multiplying reel.

In a baitcasting reel, the line is kept on a bearing-supported rotating spool that is tuned such that a single crank handle revolution results in numerous spool revolutions.

Because the reel is situated above the rod, it is also known as an overhead reel in Australia and New Zealand.

The baitcasting reel has been around since the mid-seventeenth century, but it was popularized by amateur anglers in the 1870s.

Early baitcasting reels had brass or iron gears, as well as brass, German silver, or hard rubber casings and spools.

These early reels had no drag mechanism, and anglers placed their thumb on the spool to help provide resistance to fish runs. They had multiplying gears varying from 2:1 to 4:1.

Some types employed bearings to mount the spool as early as the 1870s; however, manufacturers quickly added a clicking pawl mechanism because the free-spinning spool tended to generate backlash with powerful line pulls.

This “clicker” mechanism was not meant to be a drag; instead, it was designed to prevent the spool from overrunning, similar to a fly reel.

As a beginner, you might have some initial difficulty using a baitcasting reel. However, not to worry.

As you practice more and more and learn to adjust your brakes, it’ll get better.

You can also get on YouTube to watch videos that’ll help you become much better at adjusting your baitcasting reel.

In all, have a splendid time fishing.