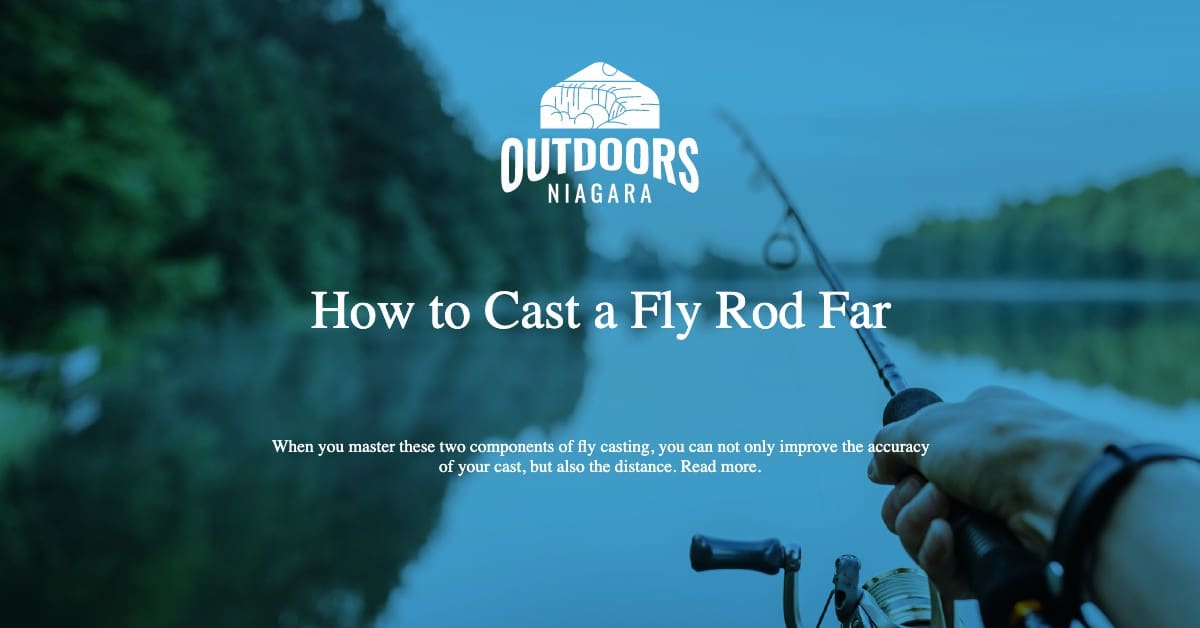 Longer casts require more powerful strokes of forward and backward motions and that the rod be held in the same linear line.

There shouldn’t be a deviation from the straight line forward or backward.

When you master these two components of fly casting, you can not only improve the accuracy of your cast but also the distance. 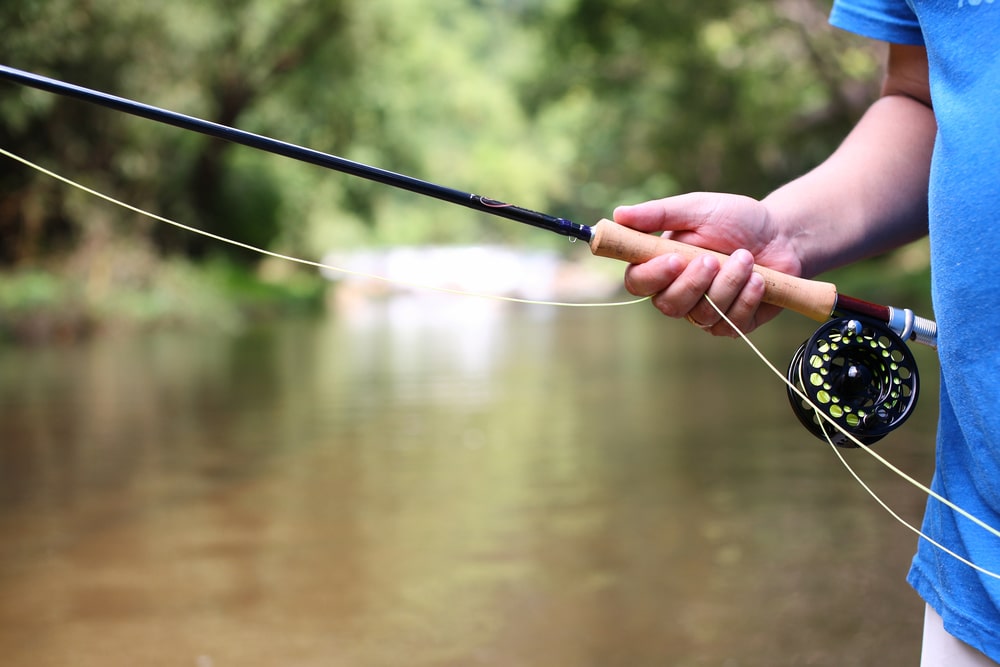 How Can I Get More Distance from My Fly Rod?

Casting technique for fly-fishing is different from casting a spin rod or baitcaster rod.

The fly rod itself is designed to not need weights to cast it.

Together, those two pieces create the momentum to drag fly line away from the angler and out farther into the water.

To cast a fly rod far, you have to pay close attention to the technique. Here’s some more on that.

There are three main considerations and some skill required to master them. They include:

The Stroke – The stroke is the movement forward or backwards. Unlike a spinning rod, a fly cast has many backward and forward movements or strokes. Each stroke adds more line (length) to the amount of line in the air.

The Power – The power is the amount of force that you apply to the stroke.

It is directly linked to your arm movement and the amount of bend you put into the rod on each stroke.

What this means is that the tip of the rod (based on action) bends in a C-shape forward or backward.

When the rod tip returns to neutral (straight line) the power that you applied to bend the rod during the stroke is applied to the line and the line sails out farther.

The Line – in this case we are not referring to the fishing line, but the line of the rod while moving between a forward stroke and a backward stroke.

To gain the longest distance while casting, the stroke line must remain precise.

It cannot deviate from side to side, even a little.

When the stroke line deviates any fraction side to side, the line oscillation forms a wave pattern that is side to side.

When that happens it robs your cast of distance. 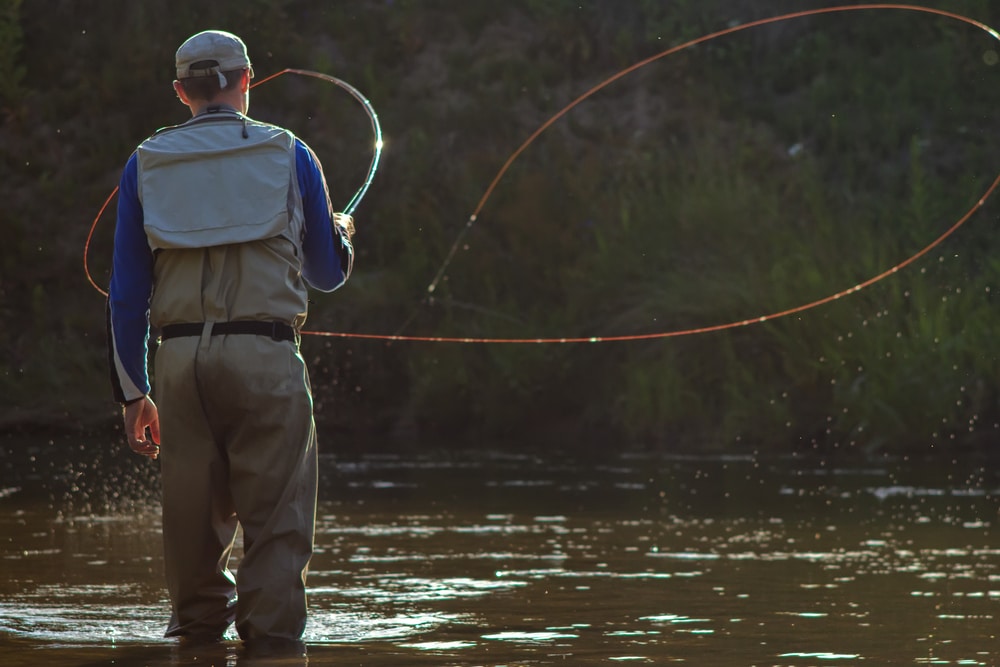 How Far Do You Need to Cast a Fly Rod?

A long cast with a fly rod is around 100 feet. Do you need to cast that long? Not usually.

There are some situations where you will need long casts but the majority of the time you will be aiming for 25-50 feet.

How we answer that question is also dependent upon the types of fish you want to target and the environment in which they live.

On a lake, casting for bass, you might want to hit the 50-foot mark more often than not.

On a river fishing for trout, you might have casts that range from 20-100 feet with the majority of those being in the 20-30 foot range.

If you are a big river casting for salmon, you might need to hit the 50-foot mark often and sometimes as long as 100 feet.

You can supplement distance with dry flies that float. If the water is moving it will carry your line with it.

On a still lake, the line will just sit there. It is a good tactic to let the water carry the line when it will as that helps to mimic the natural plight of insects caught in the water.

What Is the Average Distance of A Fly Cast?

The average distance of a fly cast ranges from 25-50 feet.

There are some situations that make being able to cast longer a good tactic.

If you can cast long distance, then the fish may not know you are there.

If you are sight fishing you will need to be able to accurately cast your fly line to a specific distance.

In this case, learning to accurately cast is key and more powerful than being able to cast accurately for longer distances.

When you sight fish, you see the fish in the water and that means they are closer to you rather than farther away.

An exception to this is if you see fish jumping and can then gauge the distance.

How Can You Improve Fly Casting Distance?

The only way to improve your fly casting distances per cast is to practice.

Some fly-fishing guides will give lessons, but it is up to you to take what they teach you and practice it constantly.

If you are learning on your own, it is helpful to place a video camera to the side of you and far enough backwards, so it captures your full line movement, body stance, and the rhythm of the fly casting strokes.

Casting Strokes – You want to pay attention to the position of the pole as it moves backwards and forwards during each stroke.

This allows you to check the line of the rod as you cast strokes.

Your goal being that the line remain very straight with no deviation from side to side.

Tip Movement – You also want to pay attention to the amount of bend in the rod’s tip as it moves through the casting strokes.

If the rod is not bending enough and your casts are falling short, then you may need to increase the power you put into each casting stroke.

Rod Position through the Stroke – You also want to pay attention to the position of the rod during the stroke.

You are standing at the 12 position.

For longer casts you may need to adjust the position of the rod to 9 PM and 3 PM or even greater to 8 PM and 4 PM.

Generally, a heavier fly line will allow you to cast farther.

The reason is that the weight of the line helps increase the bend in the rod when your casting stroke is forward.

That bend will translate the power to the line which will then carry farther than a lighter weight line.

This is a helpful setup when you do not have a lot of backwards movement due to brush or trees and your only option is a few strokes with a powerful forward stroke to carry the line out into the water.

Expect a 4 weight fly rod to cast around 50 feet maybe to 60 feet with good skills.

Expect a 5 weight rod to hit the 60-70 foot range with an average skilled fly angler.

They can potentially hit 100 feet if you are experienced in casting and your skills are perfect.

Expect a 6 weight fly rod to hit the 70-80 foot range and beyond with better casting skills.

The deal here is that smaller weight rods are generally for smaller fish, so a 6 weight rod is ideal for small-medium trout.

When fishing for trout, you are looking for casts that range from 25-60 feet at the most.

Rods that can handle heavier line and fly weights will cast farther than those that hold lighter-weight lines and flies.

What Is the World Record Fly Casting Distance?

The world record for a fly cast is 187 feet, and is held by Ranel Kommits.