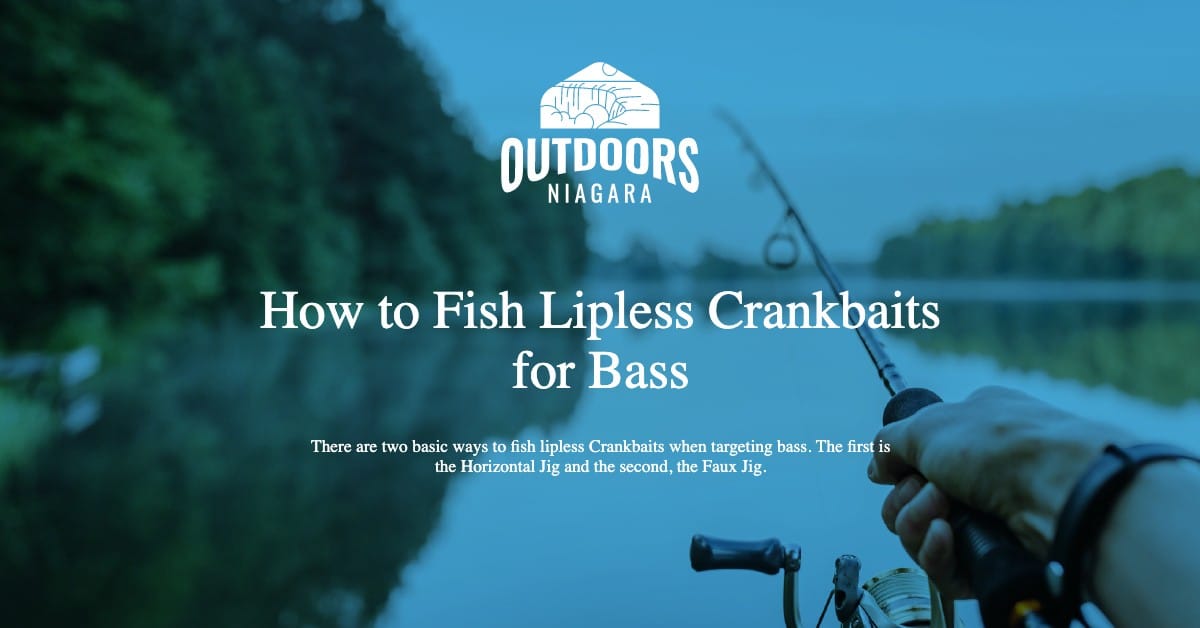 There are two basic ways to fish lipless Crankbaits when targeting bass.

The first is the Horizontal Jig and the second, the Faux Jig.

Let me explain more in detail… 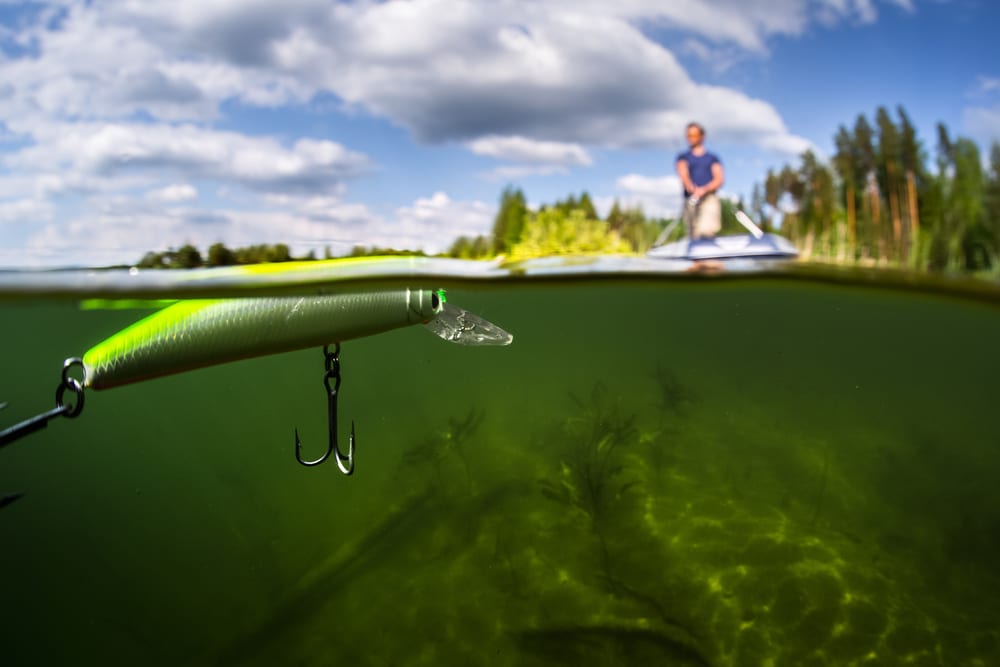 A jig is a mimic technique and when you fish lipless Crankbaits in a horizontal pattern you cast out the Crankbaits and then reel it in fast but with a few pauses.

You are mimicking a shad making a beeline to cover.

You don’t want the Crankbaits to settle down into the water.

Instead, you want to keep the Crankbaits close to the same depth throughout the journey back to the boat.

Many Crankbaits are heavier so they want to sink.

By keeping the reel action high, you will drag the Crankbaits through the water at a speed that keeps them in the top three feet of water.

The little pause you add to the swim action allows the Crankbaits to settle back to the starting depth. 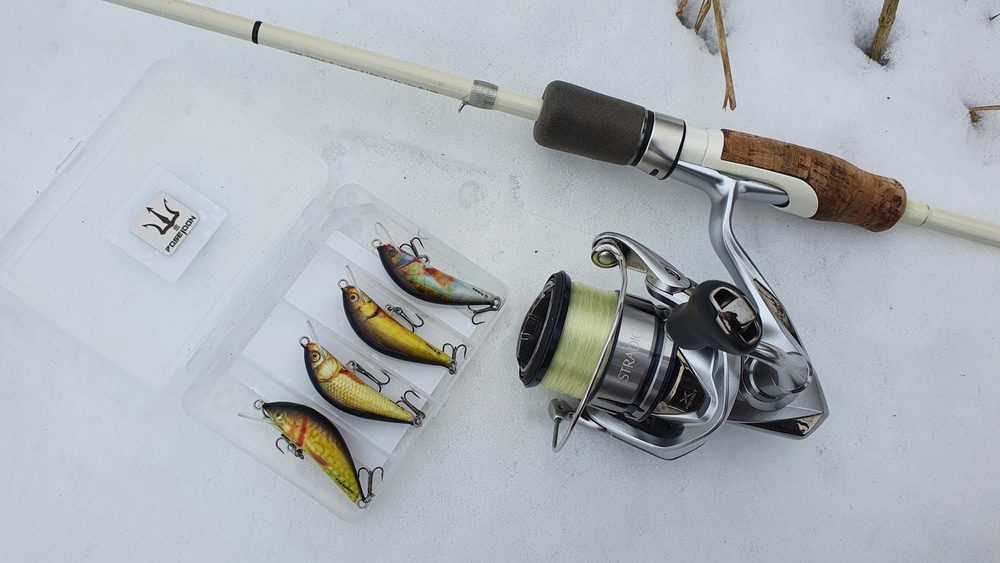 The Faux Jig is the art of using Crankbaits as you would a jig.

You cast out the Crankbaits and then retrieve them by using a short, upward wrist flick, then reel.

The motion mimics a shad in distress, and it activates the predatory nature of bass.

You will adjust the length of the twitch and reel according to the weight of your Crankbaits.

Heavier Crankbaits can handle a little more twitch and maybe a full reel to retrieve it.

You can adjust this as you fish.

What are Lipless Crankbaits?

A lipless Crankbaits is also called a rattle bait. These are flat-sided lures that have a bit of wiggle to them when they are pulled through the water.

They are set up with a pair of treble hooks and a small ring on their top where their dorsal fin would be which serves as the point where you anchor them to your line.

They come in a variety of styles and sizes, but more importantly, they come in different rattles.

Some may have just a single BB and others may have two or more.

The more BB pieces in the lure, the louder the rattle.

Note: BB(ball bearing) pellet is a small round metal ball as in the ammo used for a BB gun. They put those in the rattle baits to create the rattle.

When you fish bass, you fish them from two perspectives – Visually, and in Motion.

Bass will sniff out bait, but generally, they are interested in what catches their eye and what they can feel with their lateral line sensors.

The rattle, while a noise, translates into a vibration that the fish can feel as the Crankbaits swim through the water.

That is why either the horizontal jig or the faux jig works so well with bass – they see and feel the lipless Crankbaits.

When To Use Lipless Crankbaits?

Lipless Crankbaits are ideal for water temperatures between 40-65 degrees, which generally mean Spring and Fall.

Cooler water means that the bass are in the shallows where the water warms up quickly on a sunny day.

So, anytime you fish shallow water for smallmouth bass or largemouth bass, you want to reach for your lipless Crankbaits.

These are a very popular lure choice for early and late tournament fishing because they draw the bass to the hook.

The ideal depth is anywhere between three-five feet of water, but you can go as deep as ten feet and as shallow as a foot.

To recap when to use lipless Crankbaits:

Where to Use Lipless Crankbaits?

You can fish Lipless Crankbaits from the shore or a boat. There is not a place where they are not effective.

So long as you are staying within the when-to-use-them parameters they should be your first grab when fishing bass.

From the shore, fish them in open water where the shallow drops off into deeper troughs.

If you are near weeds, be sure to angle your line so that the Lipless Crankbaits pass by the weeds.

If you are fishing from a boat, drift into the area where the deep water begins and cast either towards the shore or along the shallow zone of water.

Longer casts are good if you have the clearance, but shorter casts work too.

Where Do I Throw Lipless Crankbaits?

Where you toss Lipless Crankbaits depends on where you are fishing.

Toss the Lipless Crankbaits out to where the water depth hits around ten feet.

Their rattle and wiggle may entice largemouth bass to strike.

If the water is warmer, you can fish the margin where the shallow meets the deeper water, especially if you are targeting bigger fish.

Because Crankbaits are both visual and physical bait, you can effectively use them to draw fish from the shore or the deeper water.

If the weather is cold, and you are fishing from the shore, you want to target a horizontal line that parallels the shore.

That cast that spans a long line of three feet deep water is going to be ideal.

If you are fishing in a small bay, find the line that gives you the longest reach of shallow water.

Freezing weather means the bass are likely in deep water where the temperature is more of a constant.

In the shallow water on very cold days, the water temperature ranges.

You want to fish from the deeper water towards the shore.

In early spring and late fall, the bass are often in the shallows where they soak up the warmth of the sun and still have access to feed on smaller fish, birds, and other creatures.

Insect naiads are more active when the water is warmer. Casting so that you parallel weedy patches can bring an explosive response from big bass hunting in the weeds.

A boat can be advantageous for targeting bass in shallow waters.

You can moor the boat just off the shore so that you have a better line to fish the shallows.

You can also achieve this angle from a structure, such as a pier.

The advantage of using a boat to target the shallow is that you can position yourself in areas that on-shore anglers cannot reach.

How Far do Lipless Crankbaits Dive?

Water that is too deep causes the Lipless Crankbaits to lose some of their charms.

These lures are awesome on the bottom, but you can also fish them in top water using a horizontal jig motion.

On a day when nothing else is working in the deep water, you can try the Lipless Crankbaits in water that is deeper than ten feet.

You want them to stay closer to the surface, so the retrieval is much faster.

Cast them out far, and then swim them quickly and reel fast to keep them on or near the surface.

That is a little bass fishing tip that not many people know.

You can draw up big, fat, largemouth bass that are curious about the commotion the Lipless Crankbaits create.

How Do You Fish Lipless Crankbaits In Shallow Water?

There are a few options. In shallow water that is less than three feet deep, you want to kind of bounce them along the bottom in a leapy-jig style.

You can also just let the lure “struggle” in the water by creating a swim, swim, swim, pause rhythm.

Both actions will ignite the predatory drive in the bass.

If you want the Lipless Crankbaits to stay on the bottom use a large size lure.

The 3/4 ounce is big enough to hit the bottom often.

You can adjust the depth of the lure by increasing the rhythm you use to jig the Lipless Crankbaits through the water.

Because of the double set of treble hooks, weeds can be a problem with Lipless Crankbaits.

There is a modification that you can do to help reduce the odds of snagging weeds.

That little trick is to snip off the front hook of the front treble hook.

It would mean that instead of three treble hooks there would be two on the front.

That is still plenty of hook action to set a hook in a bass.

Without the front tine on the treble hook, your Lipless Crankbaits slide through the weeds much easier.

It is usually that forward-facing tine on the front treble hook that catches on the weeds.

By removing it, you remove much of the drag through the weeds.