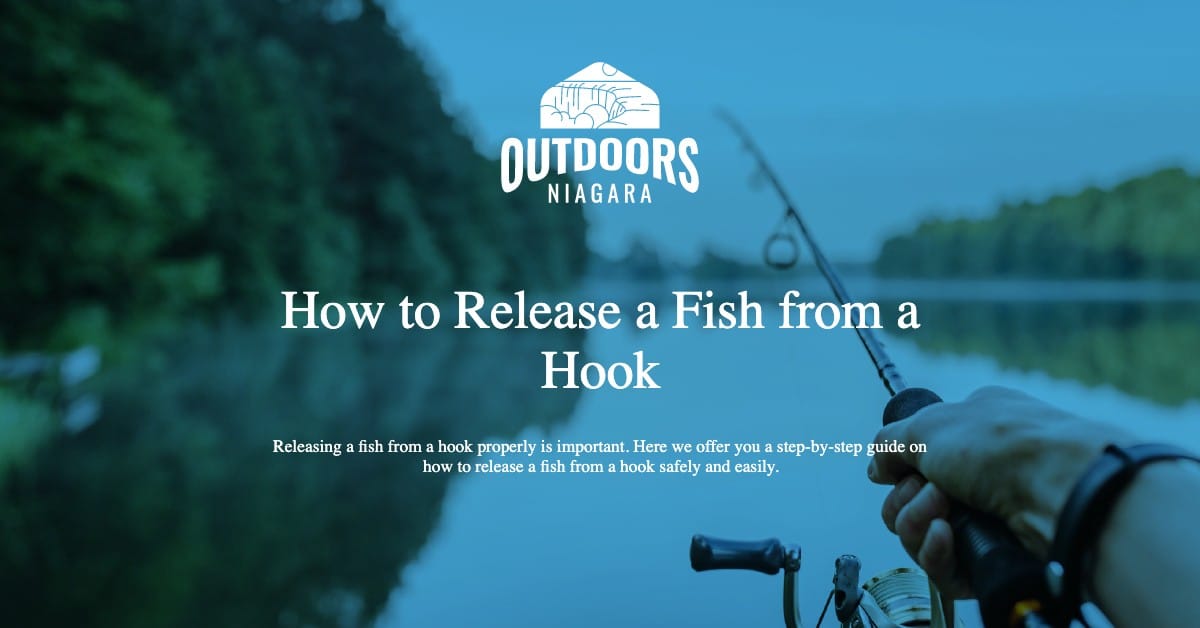 Whether you’re fishing for your personal haul or just catch-and-release fishing, anglers should understand that the conservation of fish is an important part of being a responsible fisherman.

Releasing fish species that are endangered or not of legal size are small acts that can go a long way to preserve the longevity of fishing for generations of anglers.

Releasing a fish from a hook properly is important for two simple reasons.

The first is to ensure that you do not hurt yourself with the hook or by grabbing the wrong part of the fish.

The second is to ensure that you minimize the damage to the fish, which will allow for its survival after release.

Below is a step-by-step guide on how to release a fish from a hook safely and easily.

Instructions to release a fish from a hook

Unhooking a fish isn’t always easy but is definitely worth learning.

Be sure to reel the fish in close enough to you so that you can grab it by hand.

If you cannot grab the line just yet, try not to allow the fish to bounce about on the ground while still attached to the hook.

Instead, allow it to remain in shallow water as it will tire the fish out.

An exhausted fish will be easier to handle later on.

Decide beforehand if you are going to use fishing gloves.

If you’re going at it bare-handed, then you should wet your hands with a bit of water before handling the fish.

Fish have a slime coat designed to ward off foreign bodies and they are much easier to handle with wet hands.

This is where it gets more difficult. You’re now going to grasp the fish around its pectoral fins.

These are the fins below the gills of the fish.

If you’re not familiar with the fish, try not to slip your fingers into the gills as these can be sharp and hurt you.

Remember, it’s a fish’s natural instinct to try to escape by any means necessary, so anticipating its wriggling and thrusting beforehand will help you remain calm and not react to the vigorous movement.

Tip: If it is not a larger fish, you can place your index finger under the chin of the fish, which will make it more difficult for the fish to create force when moving about.

Try to identify where the fish has been hooked.

Generally, if the hook is in the top or bottom lip, this is soft tissue and it should be fairly easy to remove.

You may be able to do so without any equipment.

Grab hold of the base of the hook and slowly but firmly work the hook in the opposite direction to which it went in.

This is generally in a downward and inward direction.

Give it a little wiggle if it doesn’t come off easily on the first attempt.

This step is only relevant if you intend to release the fish.

If so, here’s how to do so correctly to give the fish the best chance of survival.

The release process is straightforward if you’re fishing in still water conditions, such as in lakes for bass.

Simply lower the fish into the water by the lower jaw. Keep it submerged until the fish starts moving.

Once you can feel some force from the fish, you can let it go.

The process is slightly different if you’re fishing in water with more of a current such as in rivers for trout and perch.

Here you’ll want to lower the head of the fish into the water while supporting the belly with your other hand.

Point the fish upstream and into a light current. Move it about gently to get some water back into its gills and release it when you feel some force.

How to remove deep-seated hooks

If the hook is more deeply inserted in the fish, you may need to use equipment like pliers or disgorges to retrieve your hook safely.

If you’re using a disgorger:

Removing a hook that has been swallowed is a different situation altogether and usually means that the hook cannot be retrieved without causing significant damage to the fish. In this case, you’re usually left with one of two options.

Add the fish to your take-home and remove it when the fish is dead.

Snip your line as close to the hook shank as possible, leave the hook in, and release the fish.

Fish have a greater survival rate with the hook left in place than having it forced out.

Tip 1 – Lures are, in general, more likely to hook in a fish’s mouth than common bait and hook, which are often seen lodging in gills or bodies.

Tip 3 – Consider using circle hooks instead of J-hooks. Although they both have a similar shape, the circle hook is generally wider at the bend and reduces the chances of deep hooking.

Tip 4 – Usually, hooks come with an option of barbs or not. Opt for barbless hooks or crimp the barbs with your pliers before adding your bait. Barbed fishhooks are much more difficult to release from a fish’s mouth.

Releasing a fish from a hook is something that every angler is going to encounter at some stage.

Knowing how to do so correctly is safer for the fisherman as it reduces their chances of getting injured.

In addition, it increases the chances of the fish’s survival after release.

When releasing a fish, you should spend a few minutes reviving the fish fully before letting it go.