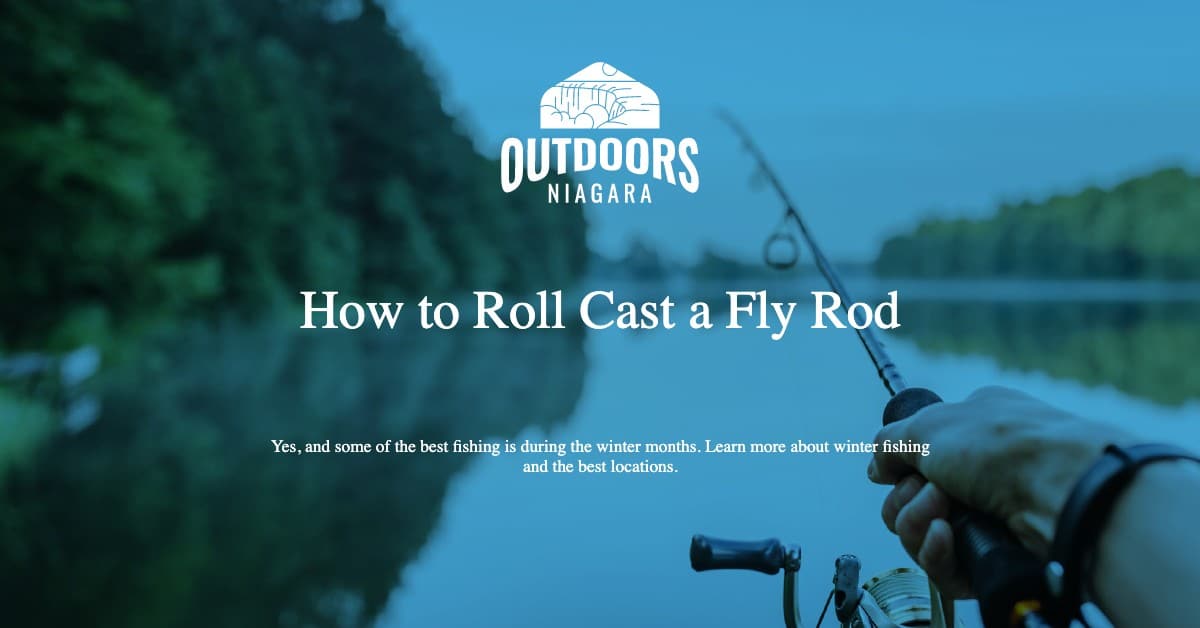 Because the roll cast does not involve false casting, the process of roll casting is easy.

Move the rod as though you are back casting then snap the rod tip forward to the 2 PM mark.

The action and power of the rod will create movement in the line which will cast the line forward. 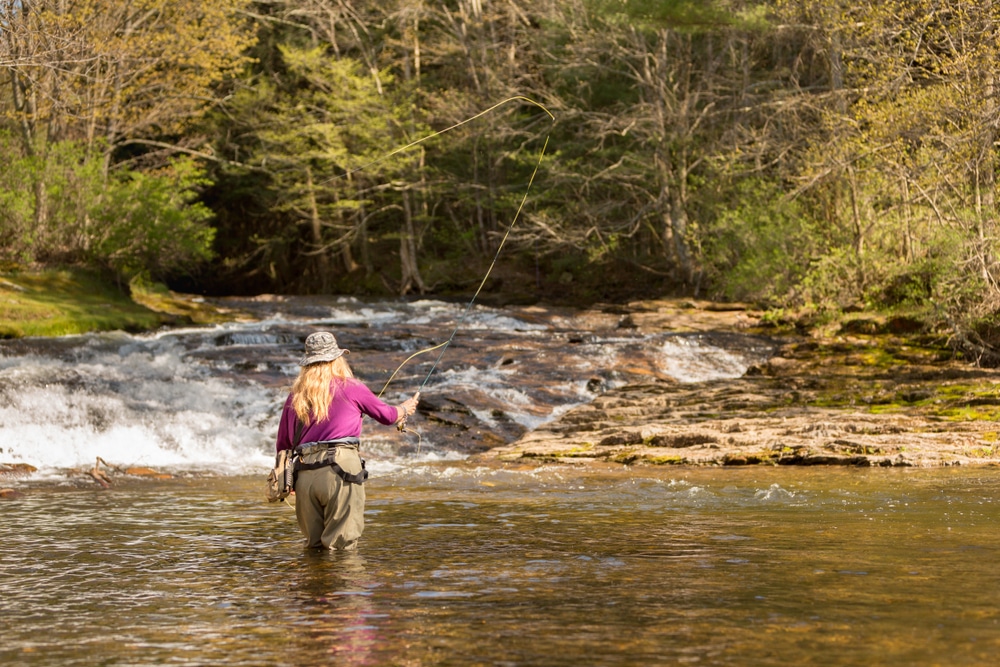 Here is a closer look at how all of that works.

The technique of roll casting with a fly rod is all about creating a loop in the line.

The line starts in the water, you bring the hand that holds the rod back so that it stops at your ear and so that the rod tip is at the 10 PM position.

Your arm is at the 12 PM position and the line is stretched out at the 5 PM position.

As you bring your arm into position and start the roll cast, the line moves from the water and then back out over the water.

The fly end of the line is moving at you while the line near the tip of the rod is moving away from you.

As those movements occur, the line forms a loop which then rolls down the line toward the fly.

When there is no more space for the roll to move forward, the fly shoots forward, the line straightens, and you present the fly to the fish. 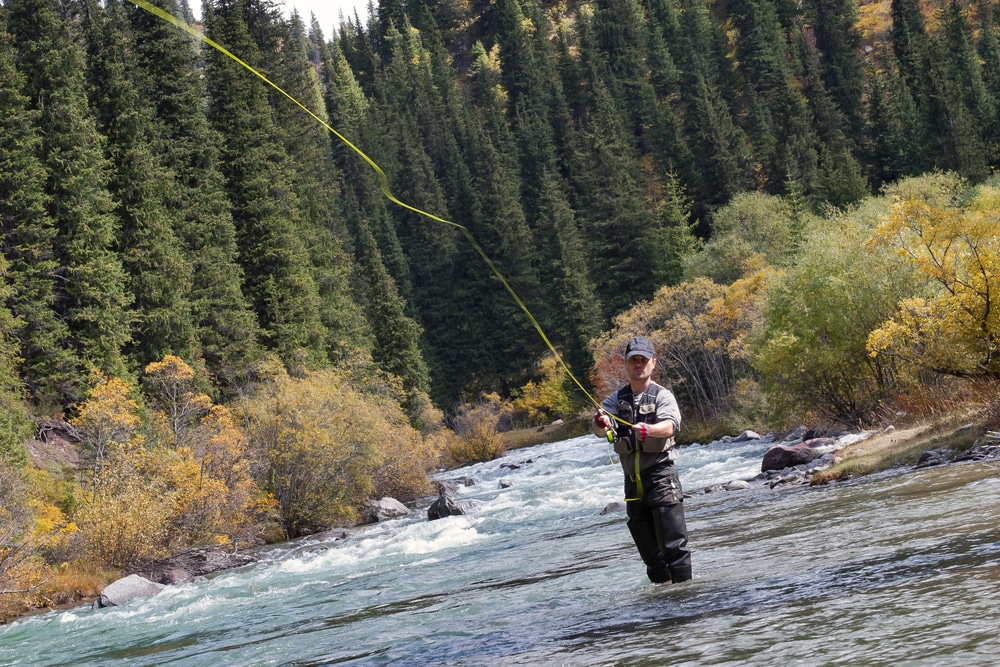 To Create the Roll Cast Action

The process of roll casting requires power, which you create as you move the rod from forwards to backward.

To move the rod properly you can picture the face of a clock.

You start at the 2 PM position with the rod forward.

You move the rod to the 10 PM position where is stops quickly and then snaps back to the 2 PM position.

That snapping action creates the power needed to cause the fly to move towards you and then away from you.

There Are Two Ways to Envision the “roll”

The First Way to See the Roll Is as The Loop Forms and Then Rolls Down the Line until It Runs out Of Space.

The second “roll” occurs when you snap your fly rod from the back position at 10 PM to the forward position at 2 PM.

Instead of your arm stopping at 2 PM, you roll your wrist forward and point your thumb in the direction where you want the fly to land.

The biggest mistakes that fly fishermen make when roll casting is moving the tip of the rod to far forward when it is snapped from back to front.

The rod tip should never move past the 3 PM position and preferably not past the 2 PM position.

As you cast the rod forward, the tip will form a C-shape and may dip down as far as the 4 or 5 PM position.

That is okay. The remainder of the rod should not pass the 2 PM position.

The C-shape is the cumulation of the power you created when you snapped the rod forward. It is expected, and you control it by stopping the rod at the 2 PM position.

The reason that fly fishermen use a roll cast is to avoid the back cast.

It is a helpful casting technique to use when there is not enough room behind you to cast traditionally.

The back cast is nonexistent when you use the roll cast.

A common error is to move the rod past the 10 PM position before you snap the rod forward.

Many people believe that the more the rod moves the more power you create and then transfer to the fly and line.

The problem is that the farther you move the rod backward and then forwards, the more the angle of the rod and line cause the fly to stall, for the line to become snagged on something behind you, or that the cast will fail completely.

How Do I Improve My Roll Cast?

The best way to improve your roll cast technique is to practice the arm position as often as possible.

You don’t even need to have a rod in your hand to practice hand positions.

Bring the casting arm and hand over your shoulder and in line with your ear.

The wrist will be relaxed, and the closed fingers are facing your face and pointing gently at your shoes.

That means that the angle of the rod is back at 2 PM.

Move the arm forward to 2 PM and then flex your write forward.

The thumb is on top of your closed hand and as you roll the wrist forward to the 2 PM position, you point the tip of your thumb where you want the line to land.

At this point, your arm is unfolded and extended forward.

Practice that technique slowly until you master the movement of your arm.

You want to be able to do this range of motion until it becomes second nature.

Then add the fly rod and practice without the line.

Doing so gets your arm used to the weight of the rod and your hand will thank you if you go slowly.

When the process is comfortable, try casting flies repeatedly rather than fishing.

When you have mastered the roll cast, head out and test your success with fly and line.

Can You Roll Cast a Dry Fly?

Yes. A dry fly is simply a fly that floats. It is not necessarily dry.

Wet flies sink and dry flies float on or near the surface.

The roll cast technique works well on both wet flies and those that are dry.

How Far Can You Roll Cast?

How far your fly flies depends on its weight and your roll casting technique.

If your skills are top-notch you should be able to hit the 30-50 foot mark with ease. If your fly is heavy enough, you might hit the 75-foot mark.

Another factor that Impact the Distance that your roll cast travels is the amount of unspooled line you have available.

Generally, you unspool the fly line in the length that you want your fly to travel.

Too much line off the spool means you have to retrieve the line before you can set the hook.

Can You Haul on A Roll Cast?

You can haul on a roll cast, but the technique of roll casting limits how effective the haul is.

There is no false casting when you use the roll cast, so there is no real need to haul.

You can haul on the backstroke and the forward stroke, but at this point, the casting is over.

Even though there are only two opportunities to haul, hauling can help you straighten out the line in the backward and forward casts.

Hauling can be a good idea if you are fishing in the wind, and you want to impart a little extra power to the fly.

Is it necessary to haul when you roll cast? No, it is not.

Hauling is a technique that we use in traditional fly casting with false casts to help maintain control over a very long line during a long cast.