'Riverman' submitted this photo and question to the Outdoors Niagara Outdoor Forum on 11/26/12 Following is his question looking for answers:

"I was walking around the Lewiston boat launch at about 8:00 pm on November 26 and saw 50 + dead fish, all of the same species, ranging between 1-2 lbs. and between 8-15 inches. I was unable to identify them but took photographs.

At first I thought they looked like silver bass but now I definitely don't think so.

Does anyone know what they are? Why they are dying? I noticed a large amount of dry corn piled on the seawall and wondered if eating the dry corn could have contributed to their death."

NOTE: On November 27 I sent a photo and Riverman's question and picture in to Mike Wilkinson, DEC Region 9,
chief Biologist for his examination and positive I.D. I will post as soon as I hear back what his opinion is...... Mark D.

Outdoors Niagara Note: This fish is definitely a Gizzard Shad like "rt" and Todd said it was on the Outdoors Forum. I went to the Fort Niagara launch ramp and to the Youngstown launch ramp on Saturday to see what I could see. There were dead shad at both. I took pictures and you can see the long hair like string off the back end of the dorsal fin like in the photo submitted by Tom Seaman above. Also notice there is no adipose fin behind the dorsal.

Here is the message I received from Mike Wilkinson, DEC Biologist December 3 2012:

"Mark, I examined some of the dead fish near Stella Niagara last week and they were all gizzard shad. A very few of the shad were missing a portion of the tail end of their bodies, suggesting that they may have been subject to turbine injury. Our best guess is that the shad originated from Lake Erie and were somehow drawn into the Upper Niagara River and then migrated downstream into the Lower Niagara River. Hope this helps."

I guess that answers that question!
Mark D.

Below is an idea of the size of the fish I saw. There was a slightly larger one wedged in the rocks at the Youngstown ramp. 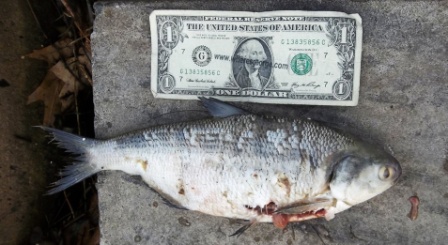 BACK TO THE Outdoors Forum

Back to Outdoors Niagara home page

So Smart Sez; "If you can't trust a fish, who can you trust?"