Only on Outdoors Niagara!

SPRING STOCKING OF THE LOWER NIAGARA RIVER
By Mark Daul

Although 11,600 this is not a record number, nonetheless, fishermen ought to be excited. With the threat of VHS virus [Viral hemorrhagic septicemia (VHS)]  shunting this kind of stocking in New York State, our Department of Environmental Conservation is doing everything it can and continue stocking of walleye all around the state. [Other species too, salmon, trout, etc.]  These walleyes were all tested for the VHS virus before stocking and were all deemed  to be safe.

This year, the stocked fish that were "born" at the Oneida Lake fish station in Constantia N.Y., the small baby fry were then transported to be released at Chautauqua  fish hatchery. There they were raised  to the size seen in the photos below. [about 1 1/2 inches] They were lovingly transported by Ron, in the DEC truck pictured below, and carefully place in the Lower Niagara with the help of Mike George, Mike Fox and Mark Daul. 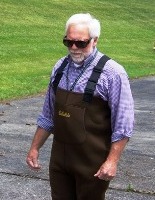 Mike Wilkinson, [pictured] Chief  DEC Region 9 Biologist oversaw the stocking and and worked his hiney off to make sure this stocking was done the way it should be. The photos below show Wilkinson in the water directing the flow of the "babies" from the pipe. He reminded me of the conductor of the Buffalo Philharmonic.

Wilkinson has worked hard for the fishermen in Region 9 and was there 90% of the time for spring stocking, he is always there first and first with hands on, and last to leave. Look through this website and you will find Wilkinson doing what he does in the salmon/trout stocking efforts. eg: [Wilson Steelies]  [Wilson Salmon]

Ron, the DEC truck driver/transporter/ hatchery clientele, told us these 11,600 babes were part of 300,000 that were put in the ponds at Chautauqua  as fry and to be raised to this 1 1/2 inches and then released around the State. Many lakes saw an injection this year. We were told all regions were clamoring for their share and most got a share. Ron also told us the success rate for raising these fish from the 300,000 was 50%! Pretty good going !

There will be more information about the history of Lower Niagara River walleye stocking and pictures posted here on this website shortly so keep your eyes out for it.

Back to Outdoors Niagara Home Page

"Be an Outdoors Niagara Booster"