Finesse fishing is a method of fishing that uses a gentler approach so that lures or flies move in a natural rhythm.

Finesse fishing is a learned skill that improves your success when fish are not biting.

It is appropriate for many species of fish, including bass, trout, and inshore saltwater species.

Finesse fishing is a tool or technique that we use when there is a change in weather.

They are often more active before a big storm and will hunker down when the water gets rough or begins to move quickly.

Finesse fishing is best employed when there is a change in barometric pressure.

When the barometer begins to rise and the pressure increases, fish will become inactive and stop foraging for food.

Finesse fishing presents lures and flies in a way that causes the fish to take easy food that is available without having to hunt for it. 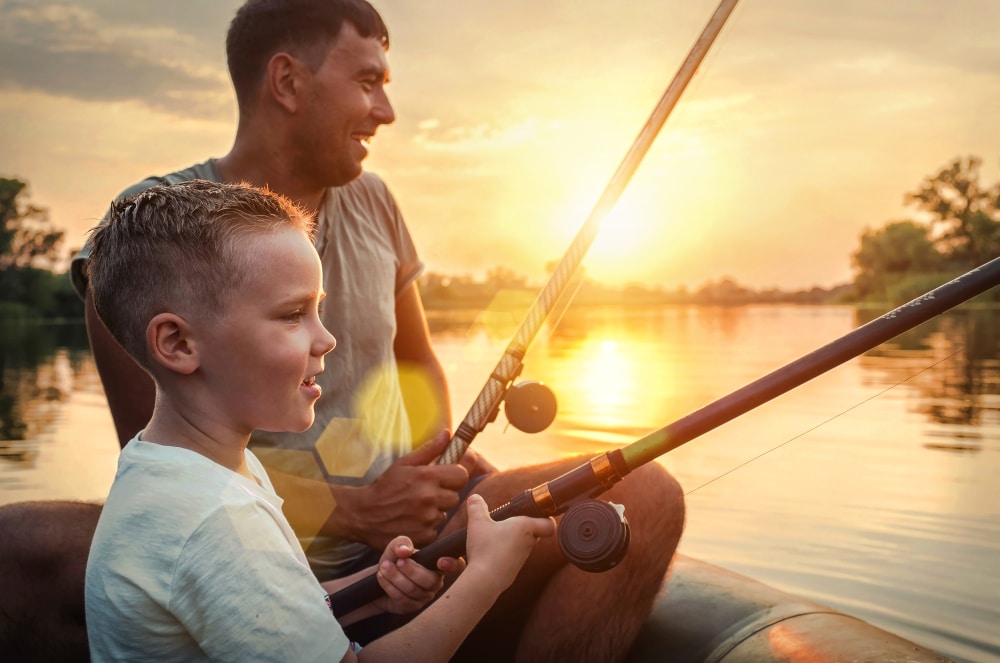 How Do You Use Finesse Bait

Drop baits are a good example of what a finesse bait is.

Take a silver shad in soft plastic Toss it out in shallow water and allow it to just drop or sink into the water.

As it falls it begins to mimic a shad in distress. You have not done anything other than toss the shad out into the shallow water.

That is important because finesse fishing is the opposite of reaction fishing – fishing where you cause a reaction or the fish to bite.

Jigging is a reaction technique. Drop fishing is a finesse technique.

The idea is to move the bait slowly rather than with speed as you would with a jig.

The top crawl technique is just like the name suggests – it is a slow retrieval over a weedy bed.

The soft plastic shad or worm will float.

With the slightest of pressure, it will try to swim over the weeds and bass will take it. 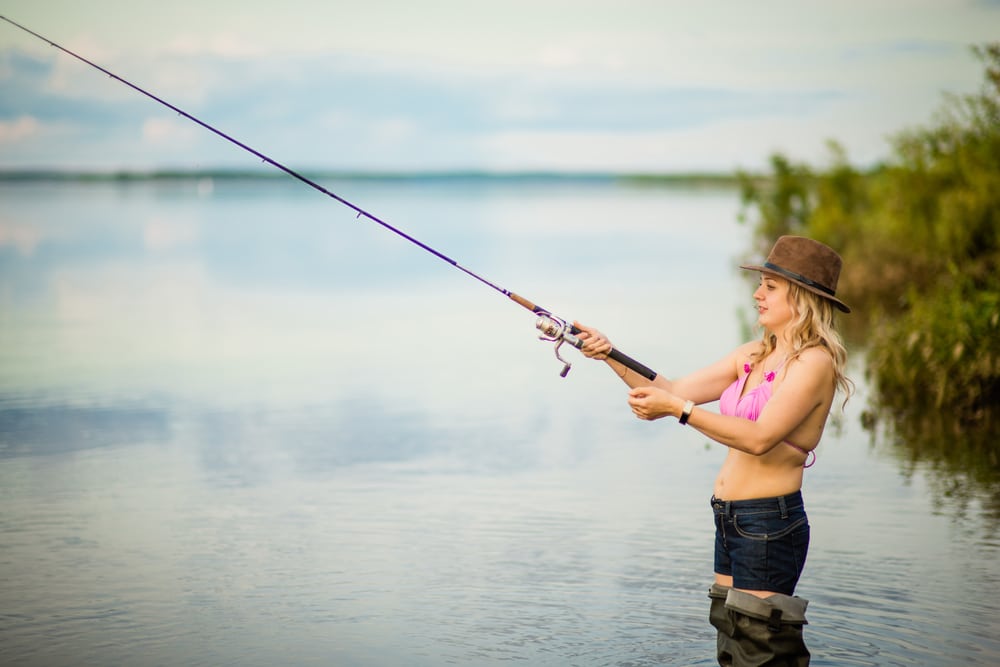 Tip: We talked about finesse fishing being a good option when the barometric pressure is high.

It is also an appropriate technique when seasonal changes cause the food sources of fish to change too.

Match the Hatch is a mantra that every angler should chant. In the fall, the weed beds begin to die, and they no longer provide the cover they did in summer for small fish.

That means that baitfish move out into the open water in schools and the bass, walleye, pike will chase them.

That silver spoon lure is probably not going to temp predatory fish or the reaction technique of fishing may not either.

It is in those situations that you turn to finesse fishing. The tactic changes as do the bait styles.

Finesse baits are something you should always keep in your gearbox and be prepared to switch from reaction fishing to finesse fishing.

What Gear Do You Need and Why?

For freshwater finesse fishing you want a 6-7 foot rod with medium or medium light power and a fast tip or action.

This rod will allow you the accuracy to cast around bank or out into the open water.

The medium or medium-light action will handle bigger fish, such as fat largemouth bass.

The fast tip will give you all the signals you need to know when a fish is taking your bait.

What Is a Finesse Reel?

A finesse reel, whether a baitcaster or spinning reel, is one that is made to handle lightweight riggings and line.

The spool is smaller and better equipped to handle thin line and small baits without the use of a sinker.

The set-up is as close to fly-fishing a non-fly rod will get.

If you were to try to cast a light line with a light lure and without a weight, you would end up with a backlash.

The Finesse reel changes that by allowing the rotor to move under a small amount of pressure, but not to spin freely.

Mono is okay, fluorocarbon is better, braid is overkill, but you can use braided line.

Leaders will range from 3-8 feet depending on what you are targeting.

For bass, 3-4 leaders are ideal. For saltwater targets, such as reds, sea bass, or snook, a 4-8 foot leader will do.

Leaders can be mono or fluorocarbon, but for most fish, fluorocarbon is a better option as it is less visible in the water than mono is.

There are a range of baits that are designed for finesse fishing, though almost anything can be a finesse rig – it really comes down to how you handle the bait.

The key to choosing good finesse baits is to look for baits that have a lot of movement.

Not movement that a Crankbaits provides, but the soft wiggle that a soft plastic worm or shad offers.

What Is a Finesse Fishing Worm?

A finesse fishing worm is a soft plastic body with a hook threaded through the unit.

There are several ways to set up a finesse fishing worm for success.

You can hook the worm through the eyes so that is flutters more vertically than horizontally.

You can thread the hook through the middle of the worm, giving it a soft bend that will also flutter and twirl as it sinks in the water.

You can thread the hook through the worm so that the top 1/3 of the worm is threaded onto the hook’s shank.

This will allow the worm to swim horizontally or vertically for drop baits.

How Do Finesse Worms Work?

Basically, they are free floating in the water and the water current if there is any will cause the worms to flutter.

That action mimics what a worm would look like if it were caught in the water stream.

The idea behind finesse fishing is a soft and light approach.

While some anglers say that you must use light setups and rigs, the real issue is not the rigging, but the presentation of the baits to fish that are not reacting to reaction lures and baits.

How Do You Hook up Finesse Worms?

There are three ways to hook soft plastic baits such as worms.

The first method and correct way to hook a worm is to thread the worm onto the hook so that the top 1/3 of the worm is on the hook’s shank.

Some soft plastic baits have a channel for threading the hook.

The next way to thread a worm onto a hook is an alternative method, and it can work just fine. It is faster and easier.

Simply thread the worm onto the hook by running the hook through the head of the worm or where the eyes are.

This technique allows the worm to hang vertically from the hook.

The third way to thread a soft plastic finesse worm onto a hook is also easy.

Simply thread the worm through the middle of the worm so that the worm hangs horizontally from the center of the bait.

The first method places the hook in the bottom area of the top third of the bait.

You are going to hook set fish that take the worm from the head or grab it from the middle.

The eye hook method will allow you to hook fish that take the worm from the head.

The middle hook method will also allow you to hook fish that take the worm from the middle section.

Is one better than the other? I prefer the traditional threading method as the worm feels more secure on the hook than it does from the other two methods.

What’s the Difference Between a Trick Worm and A Finesse Worm?

There is not a lot of difference between a trick worm and a finesse worm.

They are both skinny and long.

But the key difference is that the trick worm will float well and is best used as a top-water bait.

The finesse worm will sink making ideal for shallow water fishing where you want to entice fish to strike from the bottom.

You can also use a trick worm as a finesse worm when you need to fish top water.

The act of finesse fishing is not defined by your bait, but by how you handle the bait in the water.

When Do you Finesse Fish over Reaction Fishing?

Most anglers start with reaction fishing – they crank out the Crankbaits, and action baits to hit their target fish.

Few anglers start with finesse fishing until the reaction baits are not working.

You can finesse fish any time of the year, though there are situations when you may want to start with finesse fishing.

When the barometric pressure begins to climb, it is a good bet to opt for finesses fishing over reaction fishing.

We recommend finesse fishing with the right sunglasses for better visibility.