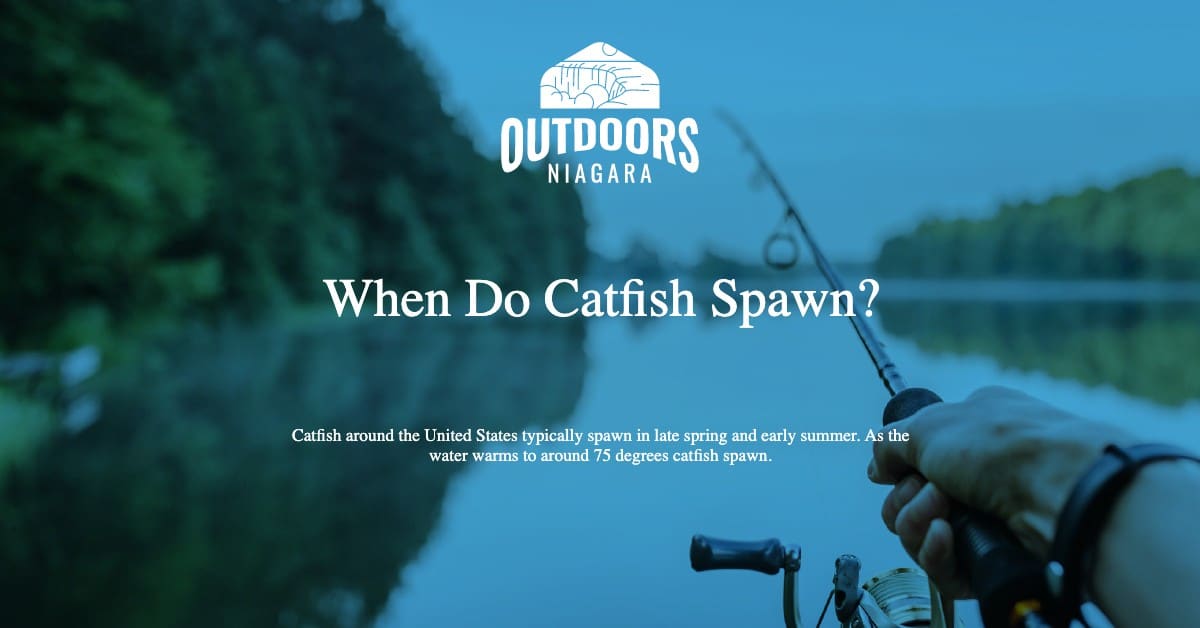 Catfish around the United States typically spawn in late spring and early summer.

As the water warms to around 75 degrees, species like channel catfish and flathead catfish get ready to reproduce.

An astute angler can use this information to maximize their chances of fishing success.

When it comes to catfish, understanding the spawn is especially important.

Every spring, catfish in states across the country leave off their normal behavior and focus on reproducing.

During this brief stretch, most catfish are more worried about protecting their young than eating. This makes it extremely hard to catch fish.

If you know when catfish spawn in your area, you can plan your fishing trips accordingly.

Here’s a brief overview of catfish spawning tendencies in several parts of America.

How do you tell if a catfish is spawning?

First of all, you can usually determine whether local catfish are spawning simply by looking at a calendar.

Catfish are remarkably consistent with their spawning habits, and you can count on females to lay their eggs during the same month every year.

You can also examine the water temperature to see if it’s spawning season.

When the water reaches 75 degrees in the spring, you can be pretty sure the local catfish are getting ready to reproduce.

Finally, you can observe the behavior of the fish to see if they are spawning.

If the fish are hanging out around tributaries, it likely means they’re gathering in anticipation of the spawn.

If you can see them hovering around caves, crevices, or other structures, then they’re probably over their nests.

How long does it take for catfish to spawn?

The entire spawning process happens in just a couple of weeks.

The first step is for the female to lay her catfish eggs in the nest.

From there, the male takes over guard duties while waiting for the eggs to hatch.

The fry typically emerge from their eggs after 6-10 days.

From there, they spend another couple of days gathered in a group around the nest.

Once they finally disperse, the male catfish is free to go on its way.

What depth do catfish spawn in?

They’re primarily concerned with finding caves or crevices that will protect their eggs, and they have an easier time locating these types of structures in five feet of water or less.

Riverbanks and the edges of lakes are often the best habitats for spawning.

That’s why many folks become bank anglers as long as the spawning season lasts.

Where do catfish go to spawn?

Catfish are capable of spawning in rivers, streams, and lakes.

They typically create their nests in areas with plenty of cover for the eggs.

When searching for a catfish nest, it can help to think like a fish.

If you wanted to keep something hidden away, you’d likely look for a well-concealed hiding place.

Catfish apply the same logic when it comes to their nests.

Tiny caves and crevices suit their purposes to perfection.

Catfish look for secluded spots that will keep their eggs away from potential predators.

Do catfish bite while spawning?

In general, catfish stop biting during the spawning season.

The toils of reproduction exhaust and distract the fish to the extent that they lose interest in eating.

When you do get a catfish bite during the spawn, it’s usually because an aggressive fish is trying to protect its nest.

You can try targeting spawning catfish with this strategy in mind, but it’s worth remembering that your chances aren’t great.

It’s also best not to remove spawning fish from their nests for conservation reasons.

If you catch a spawning female or a male that’s protecting the nest, make sure you return it to the water as soon as possible so it can continue its good work.

Removing a male catfish that’s guarding a nest will cause the entire batch of eggs to perish.

The good news is that the run of poor fishing is generally brief.

Once the spawn is over, the ravenous fish need to recover their strength.

If you’re willing to be patient, you should enjoy some amazing fishing in the post-spawn period.

When do channel catfish spawn?

Channel catfish generally spawn in the late spring or early summer, making them one of the last fish species to reproduce every year.

They like to spawn in relatively warm water, which accounts for their late-spring spawning tendencies.

While it’s generally difficult to catch channel catfish during this period, you can count on some amazing fishing before and after the spawn.

Will catfish spawn in a pond?

Catfish will certainly spawn in a pond if that’s where they find themselves living.

When it comes to creating a nest and laying eggs, catfish just need a place with plenty of cover.

These secluded spots can occur in lakes as well as rivers and streams.

Still or slow-moving water makes spawning easier, which is another reason lakes are common spots for nests.

You’re especially likely to find nests in the shallow water on the bank of a lake.

If you’re looking for a fish species to target, you can’t go wrong with catfish.

From channel cats to flatheads, these exciting fish are a thrill to catch.

When planning to target them, however, it’s essential to keep the spawning season in mind.

By fishing before and after the fish are nesting and avoiding the spawn itself, you give yourself the best chance at landing a monster cat.