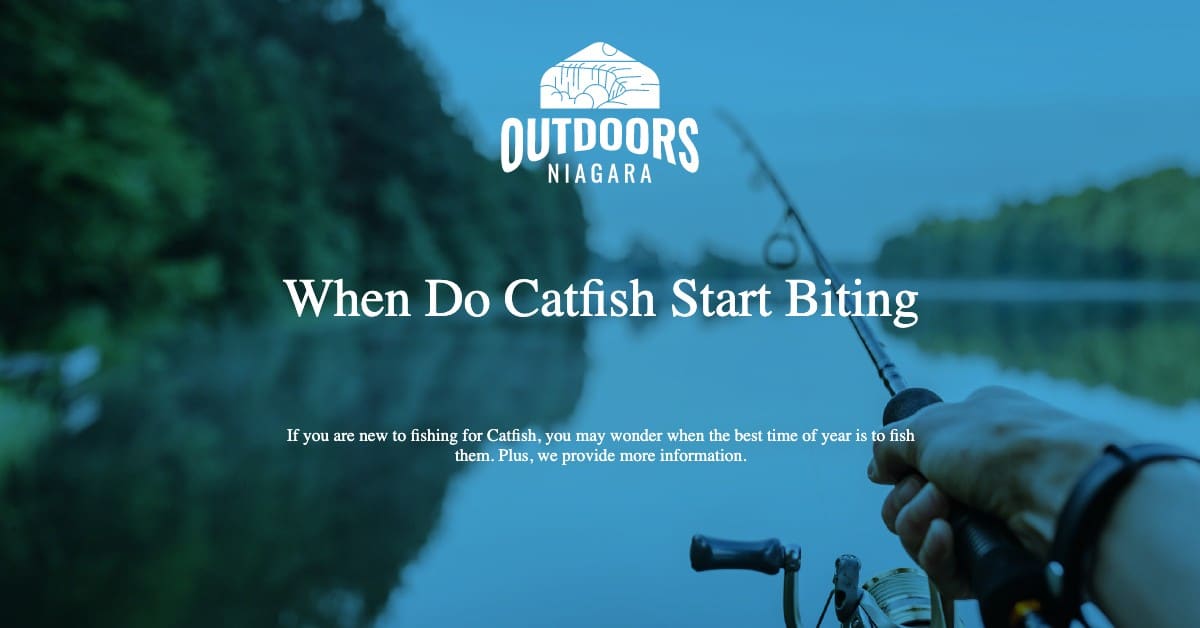 If you are new to fishing for Catfish, you may wonder when the best time of year is to fish them.

In addition, many anglers wonder when do catfish start biting.

The simple answer is that catfish bite all year long.

So keep reading as we discuss how to fish for Catfish, what times of the year they bite, and some other essential points that make fishing for Catfish more successful.

When do catfish start biting?

Catfish bite all year long, but the best times to fish for Catfish is from their pre-spawning season through the warmer parts of the year and up until the water temperature begins to cool.

Water temperature is a big key for Catfish to remain active.

In terms of water temperature, anytime the water temp ranges above 55°F, the Catfish will be active and biting.

Pre-spawn temperatures range from 55-75°F; Catfish remain active and biting when the water is warmer and above 55°F.

What time of year do catfish bite the best?

Much of the best catfish fishing is dependent upon where you are in the world.

The farther north you go, the season’s best catfish fishing changes to later in the year.

For example, in some Canadian lakes, you might still have ice on the water in June, whereas in Florida, the water is primarily warm all year.

The best times to fish for catfish are from Mid-March to the end of June for most of us.

For the far northern location, the best time to fish for Catfish begins in late May and throughout the summer.

Early fall can also be an excellent time to fish Catfish.

The Best Month to Catch Catfish

We say “probably,” because, for most of us, the water temperature will be above 55°F by May.

Again, your location impacts when the best month is to catch Catfish.

The body of water in which you fish also plays a significant role in determining the best month to catch Catfish.

Catfish are available and bite all year long. They are most active when the water is warmer.

Just past spawning, the fish can be highly active.

That time of year is generally around May.

If you are fishing for Catfish in deeper ponds or holes, the water tends to be colder at the bottom.

Those locations may have better action later in the season — June, July, and August.

By then, the water in deeper ponds, lakes, and holes will warm, and the fish that lie down there will become more active.

When the water is colder, the bodily systems of fish slow down.

In shallow waters — around the edges of ponds, lakes, and shallow streams, the water warms more quickly.

Therefore, the better times to fish shallow waters are earlier in the year — March, April, and May.

So, where you are in the world is the first consideration for catching Catfish.

The farther north you go, the cooler the weather and the longer it takes for the waters there to warm.

The ideal water temperature for catching Catfish is above 55°F.

The second consideration to find the best times of year to target catfish is the depth of the water.

Deeper water takes longer to heat. So, deep ponds, lakes, and pools in rivers will be active later in the seasons — May, June, July, August.

The month of May is the one month that spans both cold weather and warmer weather.

That makes May the most likely month for Catfish to be active wherever you fish.

What is the Best Time of Day to Fish for Catfish?

The best time to catch Catfish is at night.

You can target them an hour or so before the sun sets, through the night, and a few hours after the sun rises.

Check your local weather forecast for sunrise and sunset timing.

Plan to be on the water 1.5 hours before sunset and again an hour before sunrise.

That will give you some quality time to fish Catfish at your local spots.

Do catfish bite more at night or during the day?

Catfish are primarily nighttime feeders, but they will bite during the day if they are hungry.

In addition, the whiskers of Catfish help them detect movement in the water.

What Are the Best Temperature for Catching Catfish?

The best temperature for catching Catfish is anytime the water temperature is above 55°F.

After that, you can catch Catfish all year long.

They are just more active in warmer water than they are in colder water.

The Best Weather for Catfish Fishing?

Before, during, and after a rainstorm is the ideal weather for catching Catfish.

First, many fish become more active as food becomes more available during the rain — Insects are knocked into the water, etc.

Second, many predatory fish become very active before rain, during rain, and after the rain ends.

The second thing that happens when a storm is building is that the light dims.

The reason is that Catfish like to hunt at night, and storms begin to emulate dusk and dawn lighting.

Do catfish bite in the rain?

Yes, and during the rain is one of the best times to fish for Catfish. So pack up your rain gear and head to your local river or pond just before a storm, and the catfish will become very active.

Signs You’re Getting a Bite

When catfish bite bait, they turn their head and suck food into their mouth.

They will almost immediately turn and swim downstream to find a spot where they can eat their meal.

You will feel a few tugs on the line as they suck in the bait and turn to leave.

Be sure to set the hook quickly when you feel the first tug.

How do you know if a catfish is biting you?

Unlike many predatory fish, Catfish do not have long pointy teeth, like a pike.

Instead, they have a row of very short teeth that are like grains of sands along their upper and lower jaws.

If a catfish bites you, you will feel pressure and then a grinding action.

These fish strike y our hook by gulping prey and then sucking into their mouths.

They use pressure to crush and swallow the prey rather than a chewing action.

Do Catfish Bite During Spawning?

Catfish spend most of the time guarding the nest where the female will or has lain eggs.

During spawning season, expect the number of bites you would generally get to drop significantly.

Fishing for Catfish is a great activity. Catfish can weigh a lot, and some can be as long as an adult human.

They have giant mouths, which they use as a tool to suck in prey.

The best time to fish for Catfish is just before dark and just before the sun comes up in the sky.

Catfish are active in waters above 55°F, as well as out of the water, and throughout the warmer months of the year.

If you have not tried catching Catfish, you should.

Catfish are an easy way to target big fish with a lot of fight.

Once you catch one, you need to learn how to clean the fish.