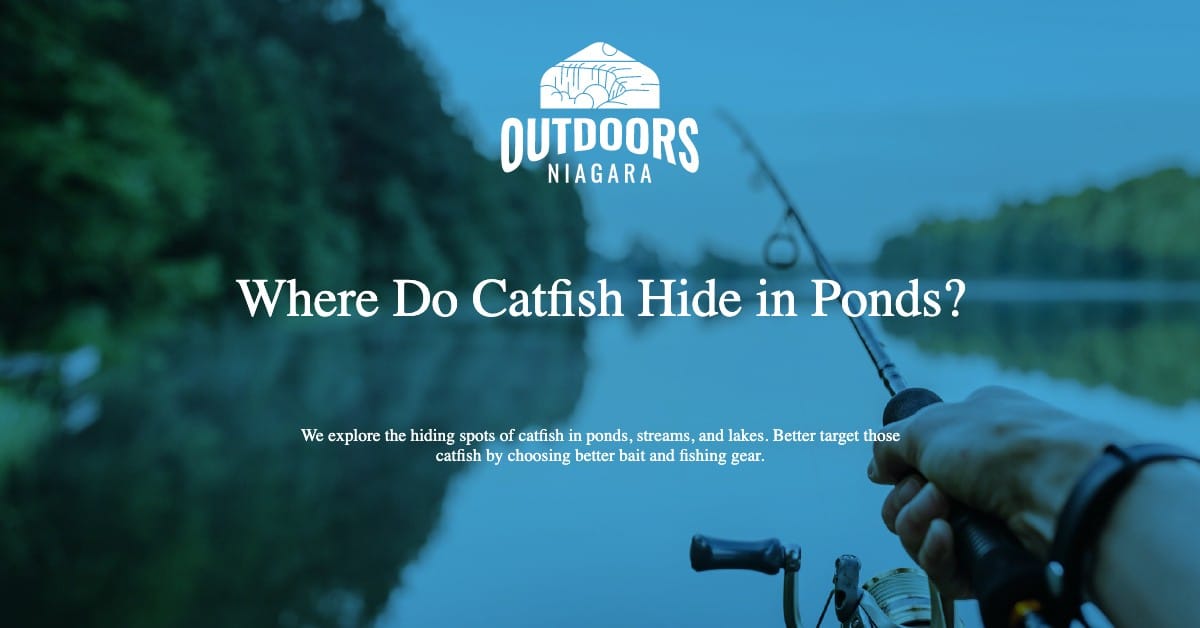 As catfish fishing becomes more popular, people ask questions, such as where catfish hide in ponds.

The short answer is that catfish hide in the deepest part of ponds, though that is not always true.

Keep reading as we explore the hiding spots of catfish in ponds, streams, and lakes.

Where do catfish hide in ponds?

Catfish are primarily nocturnal hunters. In the daytime, they prefer to hide in a dark place.

They have very poor eyesight and may be more adept at hunting without light than other aquatic predators.

If you are looking for catfish in a pond, look in the darkest spots.

Generally, that is the deepest part of the pond. If there is a pond structure, such as a boat ramp or pier, you may find catfish in those areas.

In different water structures, such as rivers or bayous, you would find catfish in entirely different locations.

For example, where there is a bank, they tend to dig holes in which they hide.

This behavior is why noodling catfish is possible.

Catfish also hang out around sinking structures, such as rocks, pumps; if you are fishing from a boat, you may be able to see the catfish lounging on the bottom of the pond.

The center of the pond can be the deepest part, so look there first.

Other divots in the pond bottom may also be a good bet for finding catfish.

Are catfish raised in ponds?

Catfish farming is a real thing. It would be best to have a pond over 1/4 of an acre, and ponds between 1-4 acres have the best success.

Catfish can also “walk” on land, and they do.

They use that ability to move from one pond to another or from one body of water to another.

Catfish eat a variety of foods, including algae.

Much of what you use for baits successfully depends on the types of catfish in the pond.

Blue catfish and channel catfish are the most nondiscriminating of feeders.

However, they have a greater variation in their diets. Flathead catfish are very aggressive hunters and prefer live foods to dead things.

If you are using dead bait, shad, bream, eels, chicken, and even dough balls made from bread can attract catfish.

What is the best way to catch catfish in a pond?

The best way to catch catfish in a pond is to use a fishing pole.

The bigger the catfish that you target, the longer the pole needs to be.

With a longer fishing pole, you can cast farther and more accurately.

You lose accuracy with a shorter fishing pole, but that may not be a big deal with catfish fishing.

Many times you want to fish near shore so that a shorter pole will work find.

However, if you need to fish from a boat or cast farther out into the pond, you want a longer pole.

Noodling is another way to catch catfish. It is more dangerous than using a fishing pole.

The noodling process involves locating a catfish or a catfish hole, reaching your arm down, and grabbing the catfish.

Usually, that means sticking your fingers in its mouth and then yarding the fish out of the water.

Why is noodling dangerous? Well, people have died noodling catfish.

A giant catfish is strong, and it can hold you under the water.

When sticking your hand into a dark underwater hole, you don’t know what is in that hole.

Snapping turtles are mean, and their bite is very painful.

They sometimes do not let go either.

Water snakes, alligators, and other things you don’t want to encounter also live in catfish holes.

A catfish hole is a burrow created by the catfish to hide in during the daytime.

These fish are nighttime predators and hide during the day.

In the US, the three main types of catfish that people fish are:

Flathead catfish are probably the fussiest of the catfish species.

They are picky eaters, even when hungry.

They are also picky about the environment in which they live.

You may find them in pond environments, but they prefer slow-moving rivers with lots of banking space.

Fishing for catfish in ponds or rivers is a sport that is growing rapidly.

Knowing how to find catfish and understanding their habits allows for a more successful fishing adventure.

When you also know the types of catfish in the pond, you can better target those catfish by choosing better bait and fishing gear.