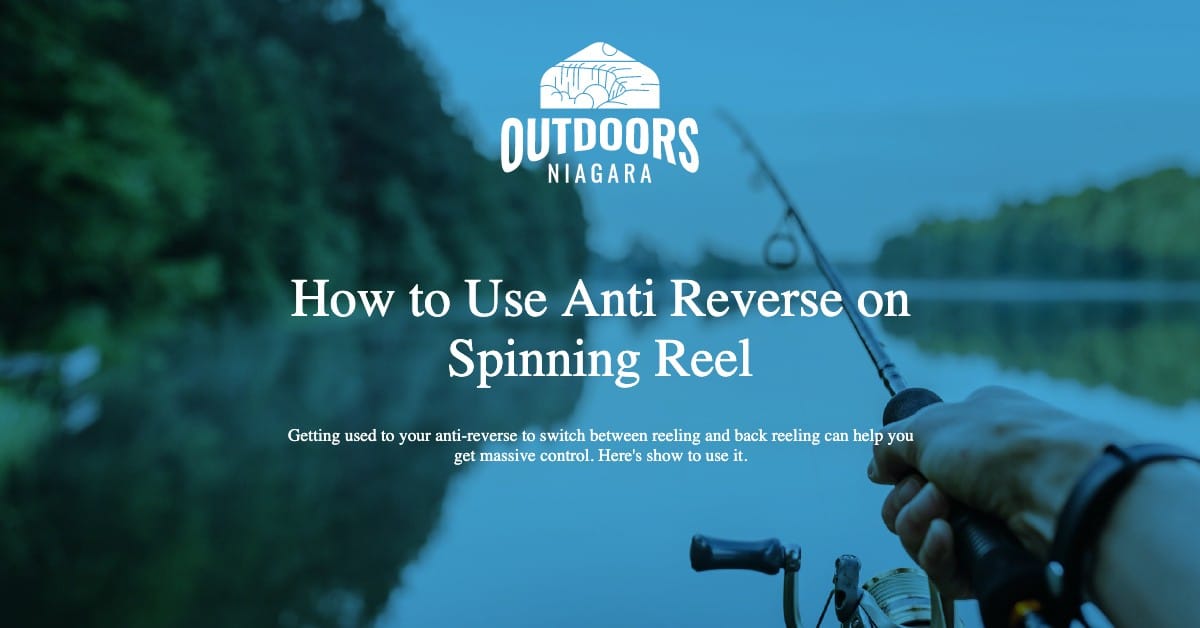 If you have used spinning reels before, you will be familiar with the anti-reverse feature and what it’s for.

But if you’re new to angling and aren’t quite sure what it is or how to make the best use of it, then you’ve found the right article.

In this write-up, we’ll cover what anti-reverse is, why it features on spinning reels in particular, how and when you should use it, and more.

So if you’re interested in learning more about spinning reels, reel options, and anti-reverse, let’s first cover what exactly it is.

If you’re reading this article, chances are you are just starting out using spinning reels, and you’re looking for a bit of guidance.

Since we’re talking about rather commonly found components to spinning reels, it’s important to ensure you’re clued in on all the different elements of conventional reels.

Starting with the ones less significant to the main subject at hand, we’ll describe the spool, bail, and handle.

The spinning reel handle is pretty self-explanatory, and we all know what that is.

Be sure that you know how to comfortably and appropriately grip the handle.

The spool you’ll find beneath the drag adjustment and which houses your fishing line is particular to your fishing reel.

Always be sure to check the spool’s capacity when spooling your reel.

Fishing line is also pretty expensive, so you want to consider using backing to fill up the space and give you some more control and strength when fighting fish, though it isn’t necessarily a requirement if you don’t expect to fight larger fish.

The bail is your casting trigger that opens and closes as your cast, and how it functions is primarily up to the manufacturer and their design.

There are some automatic ones, but most veterans prefer to flip theirs open and closed manually.

They are also crucial for keeping your fishing line in line as it goes on and off your spool.

It provides some much-needed direction.

The last components we’ll talk about are the two most important for learning how to use an anti reverse fly reel: the drag and the anti-reverse itself.

We’ll give the anti-reverse a section of its own, so let’s discuss the drag here.

Found at the top of the spinning reel, the drag system is responsible for helping you change the tension of the line.

Reels can also come in two varieties: close and open.

The closed variety have all their inner-workings hidden behind a closed, protective shell, which keeps everything in one place and provides some additional durability.

Open-faced reels lack that extra protection but make up for it by being quick and easy to adjust and fix on the fly, as you won’t have to fiddle with opening or removing this protective shield in the event of a reel failure.

By adjusting the tension of the line, you will have more control over who wins fights between you and the fish.

Properly learning how to control the drag for optimal success is crucial to a successful day fishing. 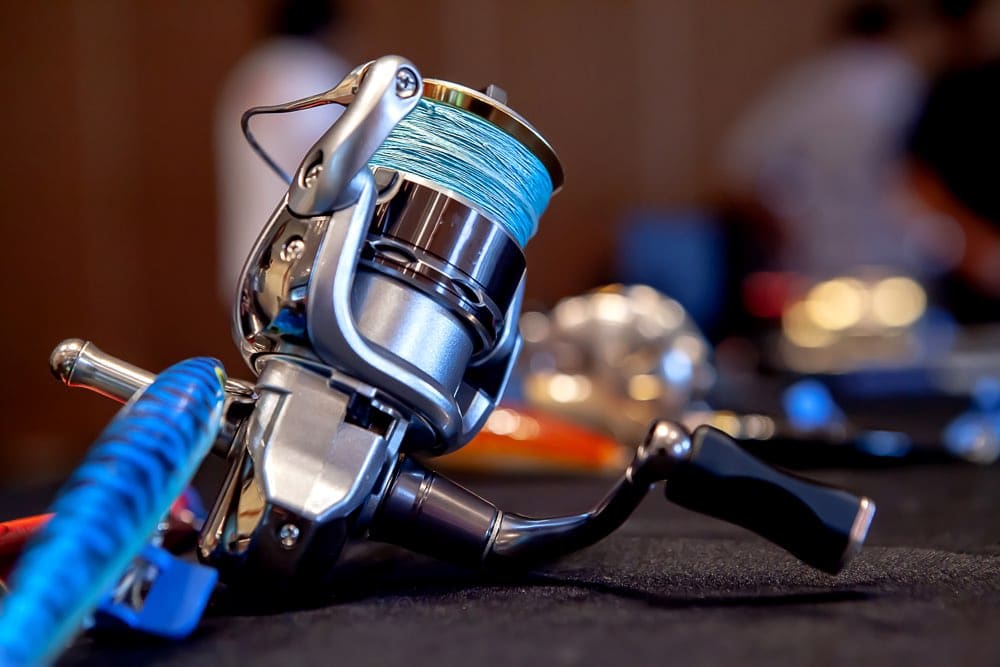 Typically found at the bottom of the reel, your anti-reverse button is used to engage this helpful tool.

The anti-reverse switch on spinning reels prevents the tackle from spinning backward and can be disengaged to allow it to turn in both directions.

This adds a great measure of control to the amount of tension you let out onto the line, which can make fighting fish much easier as you gain more control over preventing them from breaking off.

They’re included on other reels, too, such as baitcasting reels, so knowing what to look for is important for the beginner fisherman, whether you plan on river fishing, ice fishing, or going out into the big, blue sea with saltwater reels.

When switched on, you rely on the anti-reverse to provide enough tension to the line to catch fish, but because of this fixed tension, it isn’t always a reliable way to fight larger fish.

Keep in mind that most type of spinning reel options are reversible for the purposes of switching your hands.

It’s strongly recommended that you set up your spinning tackle with the handle in your less dominant hand.

If you’re right-handed, use a left-handed tackle.

This is because your dominant hand needs to hold the rod and keep it steady while your offhand has the reel, able to hit the switch, reel it in, and act as the bail arm, which requires much less work in comparison.

Experimentation is good, however, and you should find a setup that works for you.

As a general rule and practice to keep in mind, you’ll always want your anti-reverse on until such a time as you want to switch to using drag.

Otherwise, your reel can end up moving in the wrong direction and cause havoc for you and the fish, increasing the chance of it hurting itself, tangling the line, or you losing the fish.

Why do Spinning Reels have Anti-Reverse?

Anti-reverse helps by enabling a technique known as back reeling.

Back reeling is an old technique developed out of necessity, back when early designs for drags were sketchy at best.

Coincidently, back reeling is an excellent technique for fighting and bagging those larger fish that the anti-reverse struggles with.

The ability to switch quickly and efficiently to using your drag to back reel against larger fish is the main reason why spinning rods will have an anti-reverse nowadays.

This increased versatility makes spinning rods the go-to choice for many fisherpeople, as it allows you to react incredibly fast to the tug of a fish.

Keep in mind that not all spinning rods will have an anti-reverse switch.

Some brands do away with them as the back reeling technique is often considered archaic and outdated.

If you aren’t a fan of anti-reverse, then look towards brands such as Shimano and Daiwa, which have been known to make excellent quality spinning rods with popular fishing reels that do not include anti-reverse.

Overall, it remains a commonly included staple component in all spinning reels. 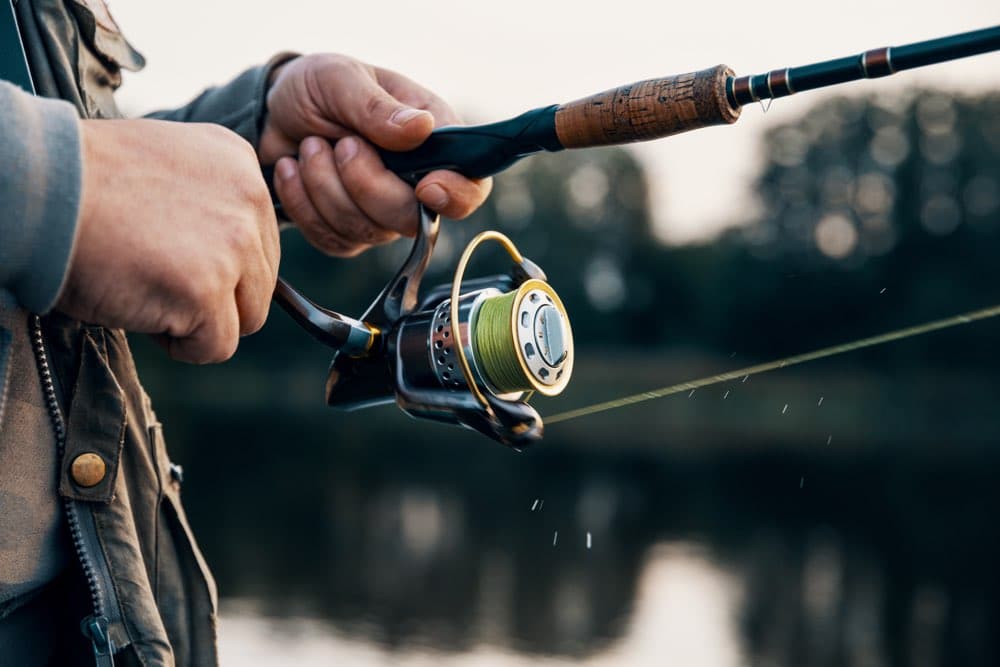 How to Make Best Use of Anti-Reverse

We’ve briefly touched upon it in previous sections, but here is a dedicated section on how you can use the anti-reverse.

You’ll want to keep in mind where the switch is on your particular reel, so you can quickly hit it when the need arises.

As a rule of thumb, keep it on at all times, so you can flip it off when the fishing reel spins.

You’ll know when you’ll need to disengage the anti-reverse once you feel that the fish is pulling hard and adding tension to the line, as this means it’s a larger size fish.

Once disengaged, you can start reeling it in, switching to back reeling to give it some space when it starts to fight and then switching back once it starts to calm down.

It’s essential to maintain a good amount of constant tension throughout the line, as when it slackens it can cause the hook to slip out its mouth, so it escapes and ruins the catch.

Eventually, you will have brought the fish in closer and closer until you can finally reel it in and bag the catch.

Spinning reels are excellent choices, and getting used to using your anti-reverse to switch between reeling and back reeling can help you get a massive amount of control over the line tension and reel in stronger fish.

Getting used to quickly hitting the switch and then maintaining a good amount of line tension will take some practice to perfect, but it’s something that many fisherpeople swear by and use to the fullest effect.